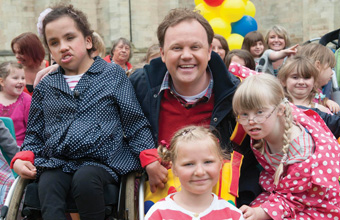 A WELL known location in York is to feature in an episode of award winning CBeebies show Something Special.
Deans Park provided the backdrop for an edition of 'Something Special - We're All Friends' which saw the choir from the Federation of Hob Moor Oaks School and Hob Moor Community Primary Schools in Acomb perform an open-air concert with CBeebies' star Justin Fletcher.
Visit York's head of PR and corporate communications Kay Hyde said: "York has some of the country's most iconic landmarks and historical sites and after some weeks of negotiations it was wonderful to have one of them showcased in this hugely popular children's show."