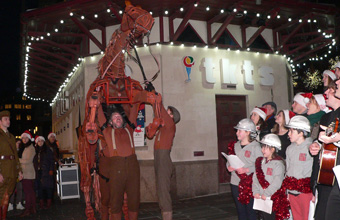 STARS of the London stage will come together on Friday December 20, 4-5pm for carol singing and festive merry-making in support of this year's Lord Mayor of Westminster's charity, the Sir Simon Milton Foundation, which works to tackle unemployment, support young people and look after the elderly in the borough.
The public is invited to join in the fun and sing along with famous faces from top West End shows at the event, organised by the Society of London Theatre, which will take place outside the Leicester Square TKTS booth in the heart of London's Theatreland.
The carol singing will be led by the West End Gospel Choir, a London-based collective of musical theatre professionals, who will perform a selection of festive songs.
As well as collection buckets circulating on the day, £1 from every discounted ticket sold over the weekend at TKTS will go to this year's chosen charity.