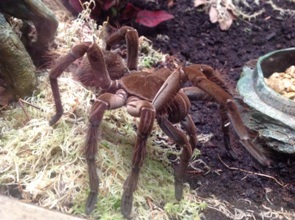 The Stratford Butterfly Farm has two amazing new creatures on display in Minibeast Metropolis. The Goliath Bird Eating Spider, also known as Theraphosa leblondi, is considered to be the largest spider in the world and was named by explorers who saw one eating a hummingbird and reported the sighting. Native to the rainforest regions of northern South America, these spiders have up to a 30cm long leg span when fully extended. Despite its name, the Goliath Bird Eating spider does not normally eat birds but is one of the few tarantulas which can capture and eat a full-grown mouse. Visitors can also see a venomous Vietnamese Centipede, also known as Scolopendra subspinipes. They are highly aggressive and have a venomous bite that causes extreme pain but is not considered fatal to humans.

Recently launched is 'Cafe on the Go', situated in the wildflower garden where baristas will be serving hot drinks, milkshakes and snacks. The retro style coffee bicycle, which is equipped with a full barista Fracino machine, will be serving a specialist Fairtrade coffee brand sourced directly from the growers.

During half term from 26 May - 3 June in the Discovery Zone children and adults can take part in twice daily 'Meet the Mini-Beast' handling sessions with one of the friendly team members. Visitors can hold creatures such as a giant African millipede, African land snail and a variety of stick insects. There will also be informative talks throughout the week for all the family about the beetles, leafcutter ants and tailless whip scorpion.

To see hundreds of spectacular butterflies, insects, reptiles and spiders visit the Butterfly Farm from 10am to 6:00pm, last entry 5.30pm. Open every day of the week except Christmas Day. For more information including admission prices and group rates, please visit the website at http://www.butterflyfarm.co.uk or telephone on 01789 299288.