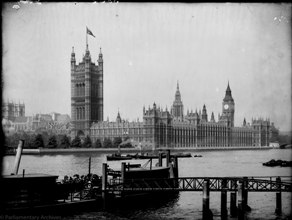 On Wednesday 31 May, the UK Parliament will take part in the first ever London History Day with a series of events on the theme '1,000 years of history…where history is still being written'. Visitors will have the chance to attend a free talk about the Elizabeth Tower ('Big Ben') by one of the clockmakers or guides and families visiting with children can take a themed family tour around Parliament.

A wider audience can take a 'behind the scenes' look at rarely seen London-themed objects in Parliament's Heritage Collections on social media throughout the day. Objects which will be highlighted include the Ceremonial Silver Trowel used to lay the first stone of the Elizabeth Tower (Big Ben) and photographs of the damage caused by air raids on the Houses of Parliament during the Blitz.

Amy Pitts, Head of Visitor Services and Retail, UK Parliament said:
"We are delighted to be participating in London History Day on 31 May, especially as history is very much being written on this date during the pre-election period. Parliament will be open to visitors on 31 May, as it is on most dates throughout the year, with special events as well as our usual tour programme - but you don't need to be in London to be part of our events, follow @UKParliament and @UKParlArchives where we will be sharing interesting objectives from our archives throughout the day."

Duncan Wilson, Chief Executive of Historic England said:
"It's wonderful to see so many of London's extraordinary museums, galleries and cultural organisations taking part in the first London History Day, and celebrating the people, places and objects that make London special. An awareness of our city's special character keeps us strong in times of change and throughout this day, we are encouraging people to look afresh at the stories and places that help define our city's diverse and rich heritage."

London History Day highlights the capital's extraordinary history and heritage and is part of Historic England's wider 'Keep it London' campaign which aims to encourage the public to notice, celebrate and speak up for the heritage in their city. Last year, Historic England polled Londoners about when they thought would be the best date for London History Day. The day when Big Ben first started keeping time in 1859 was chosen from a selection of 10 key moments in the city's history. The Houses of Parliament and Big Ben were voted as the place that best sums up London.

By participating in this event, Parliament will promote that it is open to UK and international visitors. The Palace of Westminster is home to one of the world's busiest parliaments, with more than a million visitors, including 70,000 school children, passing through its doors each year. Visitors are welcome to watch debates and committee hearings or take an audio or guided tour throughout the year. For those who cannot visit in person, a wealth of information is available on the Parliament website.