Thousands turn out for record-breaking magic fun at Gulliver's 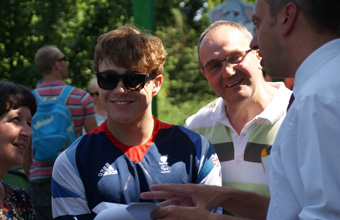 OVER 300 people joined a gold medallist to help Derbyshire theme park Gulliver's set a magical world record as the park celebrated its 35th birthday.
Thousands of people flocked to the Matlock Bath theme park to take advantage of family tickets at the special birthday discount price of £35.
Families basking in the July sunshine gathered together in the afternoon to mark the occasion by taking part in an attempt to set a new world record for the largest group of people waving a magic wand.
The attempt was led by Mansfield-born Paralympic gold medallist Oliver Hynd, who acted a one of the official witnesses for the world record attempt, and park mascot Gully Mouse.
Everyone taking part waved their wand for 90 seconds simultaneously - and the park is confident they made history by entering the Guinness Book of Records.
Park manager Lee Stacey said: "Entering the Guinness Book of Records would be the icing on the cake after what has been an incredible birthday weekend. A huge thank you to everyone who joined in the fun and helped us to mark a really special occasion in style."
Gulliver's will now be sending off their claim pack to get the attempt officially verified by Guinness World Records.