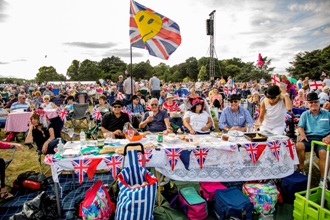 Since their first concert in 1997 the Battle Proms have been treating their audiences to a heady mix of sublime classical music, carefully choreographed Spitfire and cavalry displays, dramatic cannon fire and stunning firework finales. As the series enters its 20th anniversary year, the lakeside setting at Ragley will once again provide a striking backdrop to the pyrotechnics when the Battle Proms returns to Ragley Hall on Saturday 12 August 2017.

Now in its 7th year at Ragley, The Battle Proms takes much of its historical inspiration from the Napoleonic wars. As well as staging a colourful skill-at-arms cavalry display in full regalia, the Battle Proms is also the only place in the world you can see Beethoven's Battle Symphony performed as he intended. Written to celebrate a key victory during the Peninsula War, the Battle Symphony was composed to include 193 live firing cannons, not something you can find in your average concert hall! But the Battle Proms Team brings over 200 cannons to each of their concerts for use in Tchaikovsky's 1812 Overture and the Battle Symphony. It is this authentic, groundshaking and breathtaking percussion that makes the Battle Proms signature piece a truly remarkable experience and one that keeps audience members returning to their concerts year after year.

In a very special addition to their 20th anniversary programme, the Battle Proms team are also delighted to announce that The Red Devils - the British Army and Parachute Regiment's official display team - will perform their daring freefall display in the skies above the concert! And if this wasn't drama enough, the Battle Proms have worked closely with the Grace Spitfire team over the years to create one of the most carefully choreographed Spitfire displays you are likely to catch this summer. So much more than just a fly past, this display has the iconic plane dancing through the sky to the opening pieces of the orchestral performance by the 60 piece New English Concert Orchestra. The full orchestral programme then takes centre stage for the rest of the evening, complete with a stunning performance by star soprano Denise Leigh and culminating in a flag-waving, sing-a-long 'last night of the Proms' style finale as a spectacular firework display lights up the sky!

For more information, or to book tickets for this spectacular night out, visit http://www.battleproms.com or call 01432 355 416.