The Making of Harry Potter today welcomed its ten millionth visitor since opening in 2012. 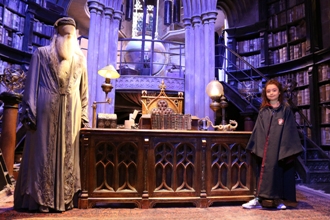 Olivia Murray, 8, from Newcastle was delighted to be given the chance of a lifetime to step onto the authentic set of Professor Dumbledore's Office and sit at the headmaster's desk used during filming for a one-of-a-kind photo opportunity. After exploring both Dumbledore's Office and the Gryffindor Common Room, Olivia and her family enjoyed a guided experience through the Studio Tour. Olivia is a huge Harry Potter fan and was given tickets to the Studio Tour as a Christmas present, she described the experience as "a dream come true".
Geoff Spooner, General Manager and Vice President, Warner Bros. Studio Tour London says: "It's amazing to have welcomed our ten millionth visitor to the Studio Tour today. Since opening in 2012, we've been delighted by the overwhelmingly positive response we've seen from Harry Potter fans all over the world. In that time, we've launched two permanent expansions allowing fans to walk through Platform 9 ¾ and the Forbidden Forest, received numerous awards and been rated as 'Excellent' of 'Very Good' in 96% of the 31,000+ reviews on TripAdvisor. With lots of exciting developments to come, we can't wait to welcome more fans to experience the magic of the Studio Tour over the coming years".

The unique attraction offers visitors the ultimate chance to get up close to authentic sets, discover the magic behind spellbinding special effects and explore the behind-the-scenes secrets of the Harry Potter film series.
Visitors are able to explore the original Great Hall, experience green screen technology flying a broomstick over London and step into the Forbidden Forest all before marvelling at the breath-taking miniature scale model of Hogwarts castle. The Studio Tour has been well received with 96% of the 31,000+ reviews on TripAdvisor rating it as 'Excellent' or 'Very Good'.

Highlights include walking through the Great Hall where so many famous scenes were shot, seeing the treasures stored in Dumbledore's office and strolling down Diagon Alley.

Tickets must be pre-booked at http://www.wbstudiotour.co.uk or by calling the Studio Tour's Visitor Services Team on 0345 084 0900 and cannot be bought at the attraction.