THE ELECTION, EQUAL PAY AND BIG PANTS ON THE AGENDA AT A LIVELY LITERARY FESTIVAL WEEKEND 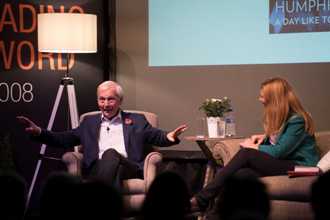 A glittering gallery of famous names descended on Stratford for the Literary Festival's Winter Weekend.

With over 2000 tickets sold, audiences packed in to hear veteran broadcasters John Humphry's and Sir Trevor McDonald recall encounters with Margaret Thatcher and Nelson Mandela, while the Birmingham MP Jess Philips shared her thoughts about the upcoming election, and the importance of empowering normal people to change their lives.

The programme featured two of the country's leading historians with Sir Max Hastings taking the audience through the calamitous WW2 bouncing bomb raids, and Radio 4 presenter Tom Holland talking about the enduring influence of Christianity. The UK's leading academic on Shakespeare, Oxford University's Professor Emma Smith, brought the place alive with her thoughts on Shakespeare's relevance today and comedian and writer, Jenny Eclair, raised the roof with tales of her stellar stand-up career and her best-selling novel.

In a programme of events which ran from 1 to 3 November, the Festival also included the BBC journalist Carrie Gracie who joined the line-up mid-way through the tribunal over equal pay in the Corporation. TV producer David Parker shared moving footage of an elderly Laure Lee reminiscing abut his career against a backdrop of the Cotswold valleys, and connoisseur Ned Palmer took his audience on a cheese odyssey around the British isles, accompanied by artisan cheeses provided by Paxton & Whitfield in Wood Street.

Families who hadn't escaped for a half term break were treated to some bonkers fun from the Really Big Pants Theatre who made a lot of Sunday morning noise, and children got involved in fun games around Roald Dahl's Rotsome Words. Messy play was the theme of Friday's events, including creating a giant Very Hungry Caterpillar with designer Judy Reaves to mark 50 years since his creation - the result now hangs with pride in Stratford Play House. Actor and comedian, Ben Miller, then eased everyone into Christmas with thoughts about meeting Father Christmas, and the danger of black holes which pop up alarmingly in his latest book, which people were able to buy two weeks ahead of publication.

'It was fantastic to welcome so many great speakers,' says Festival Director, Annie Ashworth, 'and we are very proud that people of this calibre are so keen to come and talk to audiences here. I'd like to thank our sponsors, David Hunt Lighting, who gave its name to the entire weekend, and are really looking forward to the spring festival which runs from 9 to 17 May when we will be making more of a splash over several venues celebrating the fact that Stratford is a first class festival town. '