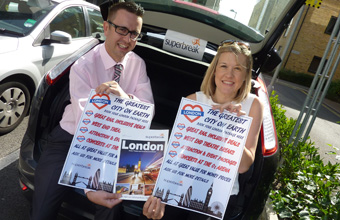 SUPERBREAK has launched a new campaign called 'London - the Greatest City on Earth' which aims to get agents behind the Capital after this summer's amazing events and drive bookings in the autumn period.
The operator has created a 'Love London' logo, based around the London Underground logo and a window poster for agents to use to push the variety of London short breaks that are available.
National sales manager Graham Balmforth said: "Never before has London been such a focus of media attention. I am sure everyone will agree that it has been showcased amazingly by all the Jubilee and Olympic coverage and it really is the greatest city of earth. Agents have such an opportunity now and we want to do everything we can to help and encourage them to convert this enthusiasm into bookings."