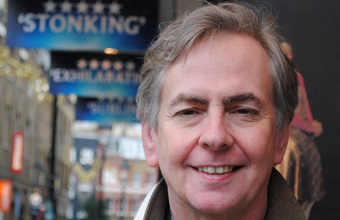 Forget the blossoms and blooms, they're few and far between in London's West End. Here the merry month of May is the time for Musicals opening - not flowers

And let's not forget that the Theatre Royal Drury Lane, the London of home of so many epoch-making Musicals, opened on the 7th of May 1663... My Fair Lady (the record-breaking original London Production and the record-breaking 2001 revival) 42nd Street, Oliver! Shrek The Musical and now the West End residence of Charlie and the Chocolate Factory. At this point, those of you who knows your shows will immediately spot that I have left out two Musicals that had their World Premiere on the stage at Drury Lane. In 2000 The Witches of Eastwick, starring Ian McShane (star of Deadwood and Lovejoy) as Daryl Van Horne, and Joanna Riding as Jane Smart (Joanna won her second Olivier Award for Best Actress In A Musical playing Eliza Doolittle in My Fair Lady at Drury Lane). You can see Joanna Riding in The Pajama Game at London's Shaftesbury Theatre (Opening Night 13th of May). The show also boasts one of the West End's finest musical theatre performers, Peter Polycarpou (Les Misérables, The Phantom of the Opera, Into The Woods) who is better known to TV audiences as Chris from Birds Of A Feather

I remember one evening, back in September 1989, standing chatting with Peter outside The Theatre Royal Drury Lane, and generally having a breather (or more likely for me back then a cigarette) before that night's performance. The date was September the 21st. The show was the World Premiere of Miss Saigon. And Peter, one of the stars of the show, was about to give his Opening Night performance as the first actor in the pivotal role of John. There are another 2184 people who will never forget that night in September -and Peter's performance of "Bui Doi" was one of the undisputed highlights. The show went on to run for ten years at Drury Lane, doubling the previous record, as well as captivating audiences around the UK and around the world (300 cities, 15 different languages). This week, Miss Saigon has returned to London, previewing at the Prince Edward Theatre until the Opening Night on the 21st of May. And I have a ticket for one of the greatest musicals of all time!