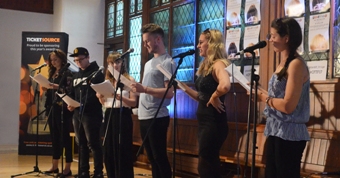 As the Cardiff Fringe Theatre Festival drew to a close last weekend, the winners of the TicketSource Festival Favourite Award and the TicketSource Best Writing Award were announced as Stammermouth - Just a Few Words and Igloo Bombs by Simon James respectively.

Over the last two weeks, audiences members had the chance to vote for their favourite performance at this year's Cardiff Fringe Theatre Festival. The votes were then taken into consideration by a panel of judges to select this year's festival favourite.

With tough competition and a record number of votes, it was eventually Stammermouth - Just a Few Words who was finally crowned TicketSource Festival Favourite, just pipping runners-up Bummer & Lazarus by Big Egg theatre.

Just a Few Words by Stammermouth was a clever use of comedy that addressed a serious subject - stammering as a disability. A unique performance that encapsulated what the Fringe is about - engaging audiences with something new. The reaction to those who attended was very strong, with comments such as:

"A very clever show. A brilliant insight into life with a stammer. Brilliant, vulnerable, and 'endearing' performance style. Great. If you get a chance to see it, really do. Such a good show."

"I laughed, I cried, I sang the beach boys. A really brilliant piece that both explores stammering and allows the audience to understand more about the impediment.

"There were tears of laughter, and of sadness. A heartbreaking insight into one living with a speech impediment."

A special mention must also go out to Five Green Bottles by Spilt Milk Theatre and Good Time Girl by Georgia Coles-Riley who also received some very positive reviews from their audiences.

Running for the first time this year was also the TicketSource Best Writing Award. Working with Cardiff Fringe Theatre Festival, ScriptDawg, Bad Wolf Production Company and Emily Nabney from a local drama production company, the award offered budding scriptwriters the chance to win a £100 cash prize and have their script performed live at the Fringe's closing party.

With over 50 scripts submitted, all of an outstanding quality, the judges found it very difficult to narrow down to a top-three or even pick an eventual winner. However, the top three scripts selected were "Binary" by Philippa Mannion, "Odd Ones In" by Claire Boot and "Igloo Bombs" by Simon James, with "Igloo Bombs" eventually taking the top spot and winning the £100 cash prize.

Judges liked Igloo Bombs because it took the theme of 'New Beginnings' to heart and turned it into an imaginative commentary on current affairs.