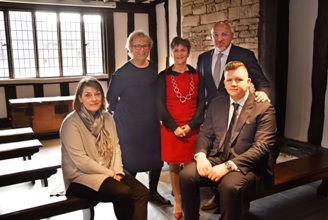 Shakespeare's England, the Destination Management Organisation for Warwickshire, has announced a new appointment within English Tourism Week which runs from 17 - 25 March. Helen Peters, Chief Executive of Shakespeare's England met the local MP for Stratford-upon-Avon, Nadhim Zahawi on 23 March as part of Constituency Day which falls on the last Friday of English Tourism Week (ETW). ETW celebrates the vibrancy and quality of England's visitor experiences and our world-renowned tourist attractions. The announcement was made at Shakespeare's Schoolroom & Guildhall which has recently been voted the number 3 attraction on TripAdvisor in Stratford-upon-Avon

Shakespeare's England is to appoint its first Destination Management Apprentice, 16 year old Ben Archer from Bidford-on-Avon, who starts on 3 April on a 1 year, Level 3 Business Administration and Marketing Apprenticeship. The appointment is a joint initiative with Stratford-upon-Avon College, who will act as the Apprentice Assessment Organisation. Ben will be concentrating on all aspects of Digital Marketing such as website content management, email marketing and social media as well as working with Kate Varvedo, Marketing & Communications Manager and Anneka Nicholls, Marketing and Administrative Coordinator. This collaboration between the College and Shakespeare's England is the next step in their developing partnership, as Stratford College and Solihull College & University Centre were recently welcomed onto the Board of Shakespeare's England, represented by Lindsey Stewart, Chief Operating Officer of Stratford-upon-Avon College.

Shakespeare's England is however a very small, hands on team, so Ben will have the opportunity to be closely involved in all aspects of the business including event management, account management for members, customer service support and administrative support for Helen Peters, the Chief Executive.

Lindsey Stewart, Chief Operating Officer of Stratford-upon-Avon College and the College's representative on the board, is particularly pleased at Ben's appointment. "Stratford-upon-Avon College shares Shakespeare's England's commitment to promoting tourism in Warwickshire, so we are delighted that Ben, taking part in our apprenticeship programme, is joining them. We are confident he will not only gain from his involvement in all aspects of digital marketing and destination management, but, with his enthusiasm and adaptability, will prove to be an asset to Shakespeare's England."

For more information on Warwickshire and Shakespeare's England visit http://shakespeares-england.co.uk