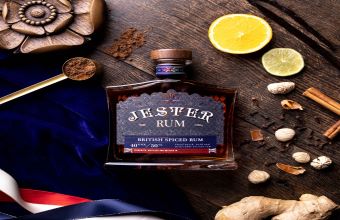 Shakespeare Distillery has launched a second unique Rum to accompany their newly launched White Rum. 'Jester Spiced Rum', is the result of a great team effort from the independent artisan spirit producer in Stratford-upon-Avon. The team have distilled their 100% British-made White Rum with Tudor-inspired fruits and spices to create a complex and memorable spiced rum. Sweet mace and cinnamon, aromatic nutmeg and warming clove make for a light-bodied dry rum boasting fruity notes. Jester Spiced is a perfectly balanced rum, great mixed with premium ginger ale and a squeeze of lime. Or it can be enjoyed shaken up as a superb, spiced rum mojito.

As with the White Rum, the name 'Jester' is taken from the sculpture which sits in Henley Street, yards from Shakespeare's Birthplace. The Rum epitomises the traits of Shakespearean jesters who were all bold, memorable, and popular characters.

Shakespeare Distillery have been successfully distilling Gin for the last five years on their own premises. Their products are inspired by the Tudor period, which is ingrained in the history of the town, being known worldwide as the birthplace of William Shakespeare.

Whilst the gin boom in the UK continues there are signs that the rum market is starting to grow at a faster rate. According to the WSTA (Wine & Spirit Trade Association) report 2019, UK consumers bought 35 million bottles of rum in the last recorded 12 months to June 2019. This was worth £1billion with a third of these sales taking place in pubs, bars and restaurants.

Shakespeare Distillery are one of a handful of UK distilleries to create their rum onsite. Their fermentation is a 7-day process in which the combination of yeast, water and sugar creates flavour and alcohol in 'Titania', their new aptly named fermenter. The distillers skillfully ferment sugar cane molasses to craft the base and the rum is then triple distilled, producing a final bottled spiced rum of 40% ABV.

Peter Monks, Director at Shakespeare Distillery said "Having successfully launched our first Jester Rum in April, we're delighted to launch our Spiced Rum which I am confident will be equally popular. I am incredibly proud of the team who have produced two fantastic Warwickshire Rums this year, especially after an exceedingly difficult 12 months. We're looking forward to our customers and our retail and on-trade partners trying this new variety of premium British rum".


The rum is available in three bottle options and retails at £34 for a 50cl bottle, £17.50 for a 20cl bottle and £6 for 5cl bottle. These can be purchased online, at the distillery shop or from their shop at No 1 High Street, Stratford-upon-Avon. Those interested in stocking the rum in their bar, restaurant, club or shop, or to arrange a tasting, request pricing and/or place an order please email