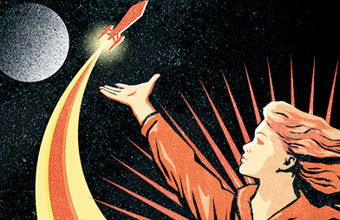 THE most significant collection of Russian spacecraft and artefacts ever to be shown in the UK will star in Cosmonauts: Birth of the Space Age, supported by BP, a new exhibition opening at the Science Museum.
Tickets are now on sale for Cosmonauts which tells the remarkable story of the scientific and technological ingenuity that kick-started the space age with a record number of firsts for the Soviet Union.
From the work of late 19th century Cosmist thinkers who first proposed that humanity's destiny lay in space, to the reality of living in space on board Mir and the International Space Station, the Cosmonauts exhibition will give visitors a unique opportunity to get up close to many of the key innovations that made space exploration possible.
Ian Blatchford, director of the Science Museum, said: "Cosmonauts is a once-in-a-lifetime exhibition that has taken years of dedication and skill from the Science Museum team to make a reality. The Russian space programme is one of the great intellectual, scientific and engineering successes of the 20th century and I am thrilled that we have been able to bring together such an outstanding collection of Russian space artefacts to celebrate these achievements. I want to thank all our partners and funders who have made this exhibition possible."
Revealed for the first time in the UK, visitors to Cosmonauts will see the monumental five metre tall LK-3 lunar lander, the finest example of its kind in existence today. Designed to take a single cosmonaut to the Moon's surface, three Soviet lunar landers were tested successfully in space although none were sent to the Moon.
The exhibition opens on September 18 and will run until March 13, 2016 at the Science Museum in London. The Museum will be open until 10pm every Friday evening during this period to allow visitors more opportunities to see the exhibition. Visit sciencemuseum.org.uk/cosmonauts for further details.