Royal Gifts at the Summer Opening of Buckingham Palace 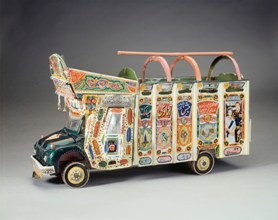 This summer visitors to the State Rooms at Buckingham Palace will enjoy a special display of more than 200 gifts presented to Her Majesty The Queen throughout her 65-year reign. A paperweight made from a dinosaur bone, a Union Flag badge that has travelled into space, a handbag woven from banana leaves and a BAFTA Award are just some of the intriguing objects on display in the exhibition Royal Gifts at the 25th annual Summer Opening of Buckingham Palace from Saturday, 22 July 2017.
The exhibition explores Her Majesty's role as Head of State, Head of the Commonwealth and Head of Nation through gifts presented by people from all walks of life and from over 100 countries and territories during State Visits, overseas tours and official engagements both at home and abroad.
When receiving a visit from The Queen the host organisation, town or country will often choose to mark the occasion by giving an object that reflects their culture or history. During an official visit to Canada in 1959, Her Majesty was presented with a paperweight made from a fossilised dinosaur bone by the City of Drumheller, Alberta, which is internationally renowned as a centre of palaeontology. The bone has been identified as part of a humerus (upper arm bone), probably from the Hadrosaur family of duck-billed herbivorous dinosaurs, and dated to around 86-66 million years old.
Official gifts are often examples of local craftsmanship and artistic traditions, such as the white Kili bag of woven coconut leaves given to The Queen by President Christopher Jorebon Loeak of the Marshall Islands following the reception at Buckingham Palace for Heads of State and Government attending the opening ceremony of the London 2012 Summer Olympics. Young coconut leaves were used to create the finely woven surface, while the inside of the bag is lined with pandanus leaves. This style of weaving is unique to the Marshall Islands, where the skills have been passed down from generation to generation.
A gift can also record a significant event or moment in a nation's history, such as the Union Flag badge worn in space by Major Tim Peake CMG, which was presented to The Queen at Windsor Castle in April 2017. The first British astronaut to be a member of the European Space Agency, Major Peake attached the badge to the left arm of his spacesuit before undertaking the first spacewalk by a British astronaut, outside the International Space Station on 15 January 2016. He was inspired to present the badge to Her Majesty by gifts made to monarchs by other great British explorers, such as Captain James Cook and Captain Robert Scott, which are also in the Royal Collection.
The Queen has supported thousands of charities and organisations throughout her reign. In recognition of Her Majesty's patronage and lifetime support of the British film and television industries, Sir Kenneth Branagh presented The Queen with an honorary BAFTA Award on behalf of the British Academy of Film and Television Arts at a reception for the British film industry at Windsor Castle in April 2013.


The Summer Opening of the State Rooms at Buckingham Palace, including the special exhibition Royal Gifts and the tribute to Diana, Princess of Wales, is from 22 July to 1 October 2017.
The exhibition is accompanied by the publication Royal Gifts: Arts and Crafts from around the World by Sally Goodsir. It is available at £9.95 from http://www.royalcollection.org.uk/shop and from Royal Collection Trust shops in London and Edinburgh, and at £12.95 from all good bookshops.
Advance tickets and visitor information:
http://www.royalcollection.org.uk, T. +44 (0)20 7766 7300.
A