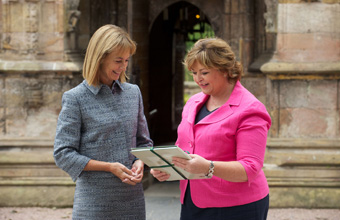 A MAJOR conservation project at one of Scotland's most historic buildings, which began in 1997, has come to an end and, for the first time since then, Rosslyn Chapel is now free from scaffolding.
Work to the chapel, which is Category A-listed, was instigated after a report in 1995 warned of damage to the stonework because of dampness and high humidity levels.
In March 1997, a free-standing steel structure was erected to cover the building and allow the stone roof to dry out naturally, and this remained in place until summer 2010.
Since then, within the project, stone and mortar repairs to the chapel's external walls, pinnacles and buttresses have been undertaken, the roof has been made watertight, the stained glass windows have been conserved, a new sustainable heating system has been installed, the organ has been restored, internal lighting has been renewed and a new visitor centre has opened.
Director of Rosslyn Chapel Trust Ian Gardner said: "This is a great moment as the far-sighted conservation project in the chapel comes to an end and the scaffolding, which had become a near permanent feature, has all been removed. For the first time since 1997, visitors can now enjoy an uninterrupted view of the exterior of the building, which, like the rest of the chapel, is rich in carvings and details."