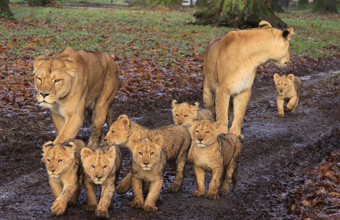 A SPOT of rain did nothing to dampen the spirits of eight lion cubs at Longleat Safari and Adventure Park as they ventured outside for the very first time.
The eight cubs, four males and four females, were born back in August but hadn't been allowed to join the rest of the pride until now.
But they made up for lost time and even the pouring rain didn't seem to be a problem for the youngsters who played and explored their new surroundings under the watchful gaze of mums Nikata and Louisa.