Preparing to do Battle in Evesham's Medieval fight to the death! 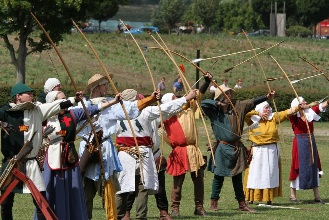 Hundreds of re-enactors will climb into their suits of armour, grab their swords, axes and pikes and engage in hand-to-hand combat in a fight 'to the death' four times over the weekend of 4 & 5 August.

The Battle of Evesham is a free to attend celebration of one of the most important battles in Medieval history. Around 5,000 soldiers lost their lives in just one day. The captured King Henry III was rescued by his son Price Edward, in doing so his Royalist army slaughtered the rebel Barons and their forces, including Simon deMontfort who is regarded as the founder of Parliament.

The action-packed weekend will also include The Battle of Evesham Grand Parade through the streets of Evesham, with knights in full-armour - mounted on their war-horses. Their foot-soldiers and Battle-Camp followers will be shouting battle-cries and singing praises for either the King or deMonfort. Members of the public can cheer support and wave flags for their favourites as they pass by.
On Evesham's Crown Meadow, thousands of visitors can watch medieval musicians and dancing along with craftsmen demonstrations and medieval cookery in the 13th Century Living History camp. Next to the camp, there will be falconry and archery displays, treasure trails and children's activities including face painting and arts and crafts. Medieval traders will be selling authentic food, drink and goods. For those visitors not keen on trying 13th Century fair, modern stalls and food outlets will provide a range of dishes and snacks plus a licenced bar and specialist drinks retailers. There will also be a fun-fair in full-swing for extra family fun close by on Corporation Meadow.
The organisers are delighted to have raised over £6K to date via a secure crowd-funding service: http://www.spacehive.com/battle-of-evesham. They would appreciate any amount to help turn this into an annual festival in the town. Even just £5 will go a long way to making the event a success!
Kate Varvedo, Events Manager at Battle of Evesham Medieval Festival commented: "We have had some fantastic support from the people and businesses of Evesham, as well as the Town Council and Wychavon District Council, and we have thanked them all on our Battle of Evesham website at http://www.battleofevesham.co.uk. This is a very expensive festival to host, with re-enactors being hired from all over the country to ensure the event is as authentic as possible."
To encourage local schools to get involved and educate the town's children about the historical importance of Evesham, a flag competition has been running with a substantial number of entries submitted. The competition will be judged by the Chair of Simon de Montfort Society, the Chair of the Historic Society and Kay McGowan, an artist. The winner will receive a real flag, the opportunity to take part in the Grand Parade and a goody bag.

Kate went on to say: "The organisers are also keen to encourage people to help with the event and be an ambassador for the Battle of Evesham. Assistance is required for bucket collections, litter picking, marshalling and car-parking duties. The Festival has something for everyone and promises to be a superb fun-filled weekend of first-class entertainment for all tastes and ages. We hope people come along and enjoy this fabulous event which would not be possible without the generous support of our sponsors and supporters".
For more information on how you can support your local battle, please check out the website at http://www.battleofevesham.co.uk or contact Kate on 07921 030286 or email to