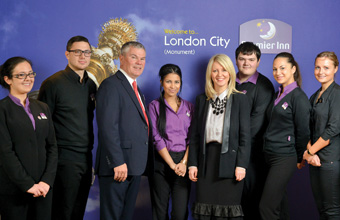 LEADING hotel chain Premier Inn has announced plans to create 8,000 new jobs over the next five years due to its rapid expansion plans.
The announcement was made at the official opening of Premier Inn's latest hotel, London City (Monument), by Whitbread Hotels and Restaurants' managing director, Patrick Dempsey and the minister for employment Esther McVey MP.
From the 8,000 jobs being created, which equates to over four per day, Premier Inn has targeted 50 per cent of them to long term unemployed people aged 16-24.
The company has also pledged an additional 2,000 Apprenticeships and 4,500 work placements for young people in the UK by 2018.