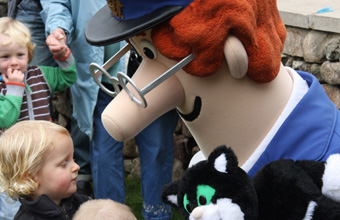 POSTMAN Pat and his trusty black and white sidekick Jess the Cat are dropping into the Ravenglass and Eskdale Railway on October 5 and 6 for a special weekend.
Pat and Jess are helping to run a very special 'Greendale Express' on the Cumbrian heritage railway this autumn.
All children travelling on the trains that weekend will receive a card for stamping, to make the most of a special post office set up just for this weekend. Other postal fun can be had weighing parcels and writing out certificates.
Pat and Jess the Cat will also making personal appearances, meeting and greeting children arriving at Dalegarth Station, which nestles in the shadow of England's highest mountain Scafell Pike.
Ravenglass and Eskdale Railway's marketing manager Rachel Bell said: "It's going to an exciting weekend for families and railway enthusiasts. We've got steam lined up plus lots of other attractions, not to mention lots of appearances from Britain's most famous postman."