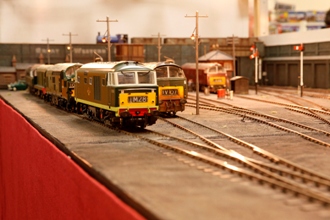 Thousands of enthusiasts are expected to visit the popular Great Electric Train Show, sponsored by Hornby Magazine, which takes place at the British Motor Museum on Saturday 8 & Sunday 9 October.

The Hornby Magazine team will be presenting Western/Southern Region layout St Stephens Road for its final exhibition outing which has been in storage since February 2014 together with their newest 'N' gauge layout Barrenthorpe which will be making its public debut.

Tom Caren, Show Manager at the British Motor Museum said, "The popularity of this show continues to grow and this year's show is expected to attract record crowds. With 25 layouts, 30 traders and a group of skilled demonstrations, this show caters for the whole family."

A further show highlight will be the extensive trade area which includes more than 30 trade stands. Manufacturers Bachmann Europe and Gaugemaster, will be in attendance alongside Cheltenham Model Centre, Grimy Times, and many more.

Free courtesy buses will operate on the Saturday only connecting the exhibition with the main line network at Leamington Spa station.

Doors will open both days at 9am with the show commencing at 10am. Advanced admission prices are adults/OAPs £9 and children £7 with half an hour early admission for pre-booked ticket holders. Advance ticket sales close on 28 September and can be purchased online at the Great Electric Train Show website or by calling 01780 480404.

To find out more about the British Motor Museum please visit the website at http://www.britishmotormuseum.co.uk or call 01926 641188.