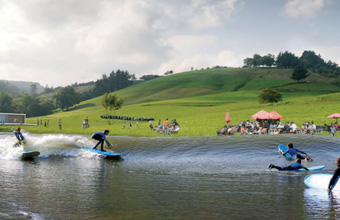 THE UK's first inland surf lake has been granted planning consent - creating a hot new surfing destination in North Wales.
Surf Snowdonia, a project by Conwy Adventure Leisure, will create the UK's first Wavegarden and the team behind the project is confident it will be open to the public next summer.
Managing director of CAL Steve Davies said: "It is excellent news to have received planning permission for Surf Snowdonia and it means we are well on track with our plans to bring surfing to North Wales. We think we will attract up to 75,000 visitors a year, not just surfers but families too."
The Wavegarden concept has been developed over the last seven years by a group of hydrological, civil and mechanical engineers - who also happen to be passionate surfers.
Investment totalling â‚¬7m has been spent, leading to the construction of a full-sized prototype being built late last year in Northern Spain.
The Surf Snowdonia project could create 135 jobs during construction with about 60 jobs after that, according to a report to Conwy councillors, and will be located on the 40 acre site in the heart of the Conwy Valley, North Wales.