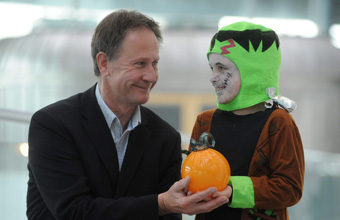 NATIONAL Glass Centre at the University of Sunderland has welcomed its 100,000th visitor since re-opening.
Five year old Alfie Leadbitter, his mum Angela and grandma Sheila were presented with a glass pumpkin to commemorate this milestone by National Glass Centre director James Bustard.
James said: "Welcoming our 100,000th visitor since we opened four months ago is a landmark achievement and is testament to the support that our centre has attracted from the region and nationally.
"We have enjoyed a very busy summer and are delighted with the response we have received from all our visitors, old and new. National Glass Centre has quickly re-established itself as a vibrant, key North East cultural and educational institution."