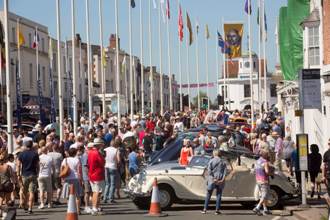 The British Motor Museum is once again supporting the Stratford Festival of Motoring and displaying an iconic Mini from its collection. At this year's Stratford Festival the Mini is taking centre-stage to celebrate its 60th anniversary with one of the streets being renamed 'Issigonis Alley' in honour of Mini's designer Alec Issigonis. The Festival, which takes place in Stratford-upon-Avon on 5 & 6 May, is free to attend and showcases a wide range of cars from classics to modern day motors.
The British Motor Museum will be displaying a 1971 Mini Cooper S mark III which was one of the last 150 Coopers to be produced. It was owned by one family from new, before being presented to the Museum in 2010 when it underwent a complete renovation. The car had a top speed of 96 mph and cost £1,058 to buy from new.
The Museum will also be running a Mini 60th competition from their stand on Bridge Street for people to guess the number of 'Minis in a jar'. Prizes on offer include a family ticket as well as discount vouchers for Museum entry.
The 2019 Festival will follow the same successful formula as the past 6 years. There will be an organised run out into the countryside on both mornings with about 300 cars returning to go on display in the town centre.
Penny Tyler, Marketing Executive at the British Motor Museum said "The Festival is a great fun filled weekend and it's all free! Along with our own treasured Mini, I'm sure they'll be plenty of other Minis taking part and joining in with the 60th anniversary celebrations!"
The British Motor Museum will continue its own Mini 60th celebrations with two special events in August. On 3 August owners of Classic Minis can take part in the Classic Mini Mosaic World Record Attempt. Show organisers are looking for 600 classic Minis and variants to spell out the phrase 'Mini 60'. The 'National Metro & Mini Show' will take place on 4 August featuring some great entertainment as well as the chance to see hundreds of both iconic marques. There is also a special display of the Museum's finest Minis - Mini: Great Little Cars, displayed on the Mezzanine area of the Museum for the rest of the year.
For more information about the British Motor Museum please visit http://www.britishmotormuseum.co.uk or call 01926 641188. For more information about the Festival of Motoring please visit http://www.stratforward.co.uk/events/stratford-festival-of-motoring