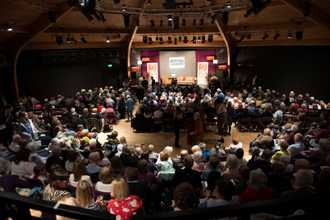 The Stratford Literary Festival's spring events smashed previous attendance records with a staggering 30% increase in ticket sales. Not only did major headliners such as Dame Darcey Bussell, Dame Jacqueline Wilson, and Doctors Henry Marsh and David Nott attract packed houses at this year's 12th festival, there was an appetite too for great literary fiction authors including Ali Smith, author of the Seasons trilogy, and historians Alison Weir and Tracy Borman. Discussion on mental health issues elicited on occasion a tearful exchange of experiences, and performers such as Natalie Haynes and John Suchet brought the ancient Greeks and 19th century Russia to life.

New events for this year, including a Writers' Day and late evening events with the likes of the Daily Telegraph journalists, The Midults, sold out well in advance, as did book-related workshops where attendees learned creative writing, to make stationery or calligraphy skills. Celebrities at this year's festival included veteran comedian Barry Cryer, Newsnight presenter Emily Maitlis (whose dog shared the stage with her), cook Rosemary Shrager, Radio 4 Woman's Hour's presenter Jane Garvey and Broadcasting House's Paddy O'Connell. Award-winning actress Juliet Stevenson entranced the audience as composer, Clara Schumann, accompanied by Lucy Parham on the piano. Great British Bake Off judge, Prue Leith, hit national headlines when she told the audience how she thought the British hadn't learned to cook for three generations, while local authors shared their writing at a very popular Live Lit evening back for its second year.

A broad programme of events for children, which included Horrid Henry creator Francesca Simon sharing secrets about the wicked protagonist of her huge selling books, included the creation of a giant Elmer elephant on the lawn at Avon Boating, and a lively Draw off challenge between leading illustrators Lydia Monks, Nick Sharratt, and David Litchfield - all of whom had to draw silly pictures chosen by the audience.

'We are thrilled by this year's festival,' said Director Annie Ashworth. 'The team, including our army of volunteers, worked incredibly hard to make sure that everything ran smoothly, and that authors and audiences were looked after. It is so satisfying to see people enjoy the events they attend, and to hear their questions to the speakers. It is wonderful to see new faces but also loyal festival-goers coming back year after year, and to welcome our sponsors without whom the Festival couldn't survive.' This year the Festival partnered with cafes and restaurants in town to offer exclusive discounts, and local charity Springfield Mind was partner charity of the year.

The festival is back on 19 July with David Nicholls, BAFTA award-winning writer and creator of the best-selling One Day, who will be talking about his much-anticipated new book Sweet Sorrow. The Festival's Winter Weekend runs from 1 to 3 November. Tickets are on sale at http://www.stratlitfest.co.uk