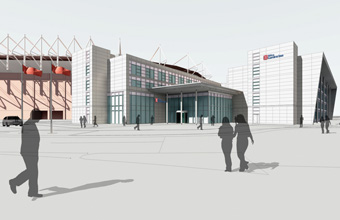 SUNDERLAND City Council has confirmed the Hilton Hotels group is bringing forward plans for a hotel development on the city's Stadium Park.
Consultation will be carried out with the public in the coming weeks, followed by the submission of a planning application.
The build is scheduled to begin from early 2014 and the hotel will open in summer 2015.
Leader of Sunderland City Council coun Paul Watson said: "This is a very exciting development for Sunderland and a statement of confidence in our city and its future, by arguably the most famous hotel chain in the world.
"Having such a quality hotel on Stadium Park will have a tangible economic impact on our city, and particularly its city centre.
"Stadium Park, through the Stadium of Light and the Aquatic Centre, welcomes hundreds of thousands of visitors each year, through football matches, concerts and other major events and this extra hotel provision will unlock further growth and development in the city through leisure and business tourism."