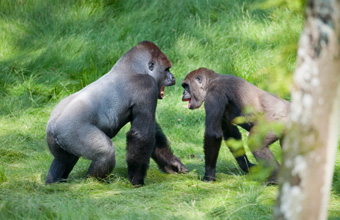 THERE were emotional scenes when gorilla brothers who hadn't seen each other for more than two years were reunited at Longleat Safari and Adventure Park.
The brothers, who were born at Dublin Zoo, met up again at the spectacular new Gorilla Colony enclosure at the Wiltshire safari park.
Keeper Mark Tye said: "The keepers from Dublin weren't entirely sure the brothers would even know each other, but the moment they met you could just see the recognition in their eyes
"We had been slightly concerned how they would react to each other and whether the big brother could put up with little Alf's playfulness.
"However they have formed a really tight bond in just a few weeks and Kesho is actually incredibly tolerant; allowing both Alf and six-year-old Evindi to jump all over him."