INITIAL WEST END CASTING ANNOUNCED FOR "THE PRINCE OF EGYPT" 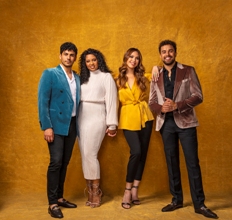 We can exclusively reveal the initial casting for the UK premiere of The Prince of Egypt, which opens at the Dominion Theatre on 5 February 2020.

Luke Brady (Sweeney Todd) will take on the lead role of Moses alongside Liam Tamne (The Light in the Piazza) as Ramses, while Christine Allado (Hamilton) will play Tzipporah and Alexia Khadime (The Book of Mormon) will play Miriam. Further casting for the show is to be revealed.

The show has music and lyrics by Stephen Schwartz and a book by Philip LaZebnik and is based on the DreamWorks Animation film of the same name.

The Prince of Egypt will have direction by Scott Schwartz and is choreographed by Sean Cheesman with set design by Kevin Depinet, costume design by Ann Hould-Ward, lighting design by Mike Billings, sound design by Gareth Owen, projection design by Jon Driscoll and illusion design by Chris Fisher. Orchestrations are from August Eriksmoen with musical supervision and arrangements by Dominick Amendum, musical direction by Dave Rose and casting by Jim Arnold.

The piece begins in previews at the Dominion Theatre on 5 February 2020, with opening night on 25 February.

The musical features ten new songs by Schwartz as well as songs from the original film including "When You Believe", "Deliver Us" and "All I Ever Wanted".

TICKETS NOW ON SALE from all usual ticket agents.