Hotel set to open in Hull 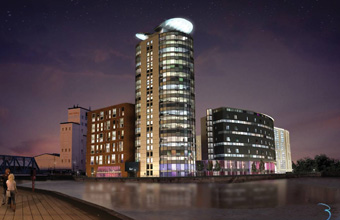 ONE of the largest hotel groups in the world has added to its portfolio in the United Kingdom.
The Radisson Blu Hotel Kingston upon Hull is scheduled to open in late 2016 and will bring the Carlson Rezidor group's UK and Ireland portfolio to 51 hotels in operation and under development.
The 168 contemporary rooms - which will offer free signature services such as high-speed internet - will also be joined by a restaurant, a lobby bar, café and health club.
The building - situated in the city's central business district along the shores of the River Hull - is part of the Manor Mill mixed-use development, which will also feature a 23-floor residential tower, student homes, a 5000msq casino and a plaza with restaurants and bars.
President and CEO of Rezidor Wolfgang M. Neumann said: "The UK is a key mature market for us, so we are delighted to bring our core Radisson Blu brand to the 2017 City of Culture."