Hotel Indigo Stratford upon Avon to open in January 2019 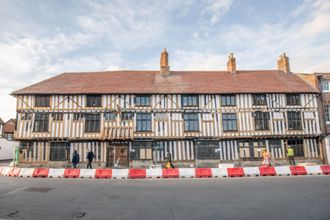 Hotel Indigo Stratford upon Avon, formerly The Falcon Hotel, will open its doors at the end of January 2019 and officially open on 4 February after a multi-million pound major restoration project. The Grade 2 listed historic building, which dates back to the 16th century, has been painstakingly restored over an 18 month period and is the biggest refurbishment in the hotel's long history. Initially it was hoped the hotel could remain open whilst the extensive works were carried out, but due to the sheer scale of the project, the hotel closed its doors in December 2017. Now the decorative black and white half-timbered building is blended with modern, stylish, contemporary bedrooms, lounges, a restaurant and bar that provide guests with a unique boutique hotel.

Stepnell, the Warwickshire-based construction contractors, have stripped back every part of the building to its barest form and the craftsmanship of the restoration has been outstanding. As a listed building, like had to be replaced with like, and everything that could be kept has been including many of the original oak beams which date back to 1622. Only beams which were beyond repair were replaced with 18 year air dried European Oak. Traditional methods have been used for the repairs which are sympathetic to methods undertaken in the past. Lath and plaster areas have undergone extensive works using lime plaster and new riven Oak lathes. A Contractor who specialises in repairs and conservation of Historic Timber Frames has been used, in fact, the same firm responsible for renovating the Hotel also carried out the major works to the Globe Theatre in London. The restoration has been a difficult and lengthy process but one that Stepnell have relished as well as being overseen by the Heritage Manager on site.

The original property was a private dwelling for 150 years after it was built before it became a hostelry. Over the years it took on many forms, including several as private properties. Its latest chapter forms the individual and fascinating Hotel Indigo Stratford upon Avon. The Hotel shares its Neighbourhood with William Shakespeare's School and Birthplace, as well as one of the most famous theatres in the world, The Royal Shakespeare Company, putting Hotel Indigo Stratford upon Avon truly on the world's stage.

Just as no two neighbourhoods are alike, no two Hotel Indigo properties are alike. Each is designed to uniquely reflect the local culture, character and history of the surrounding area. Hotel Indigo hotels create a truly memorable experience by artfully combining the modern design and intimate service associated with a boutique hotel, with the conveniences and consistencies you can expect from staying at one of the world's largest hotel groups.


At Hotel Indigo Stratford upon Avon there are 93 guest rooms which are designed on three themes, each inspired by the history and locality of the town. The Georgian Townhouse rooms offer a touch of luxury combined with homely charm and present a sophisticated and elegant look and feel. The Tudor Rooms, which mainly offer views over the site of Shakespeare's New Place, celebrate and embrace the authentic architectural quirks of the original 16th century property. The Contemporary Rooms, which are built in the newer wing, offer a sophisticated and elegant design. Of the 93 rooms, 76 are standard rooms, 2 are accessible, 12 are superior and 3 are suites. All rooms are equipped with comfy Hypnos beds with luxury Egyptian cotton linen, spa-inspired bathrooms, Nespresso coffee machines, high speed Wi-Fi and a variety of channels on a 40" flat screen TV.

Within the hotel there will be a very special restaurant. The Woodsman will be a definitively British offering. Mike Robinson, who owns London's only Michelin starred pub, The Harwood Arms, is very excited about bringing the best of British seasonal ingredients to Stratford. The Restaurant, with its own entrance off Church Street, will celebrate honest British food with theatre and gusto. The best wild and farmed ingredients are being sourced from the local area and Mike even harvests the wild deer and game from the Cotswolds for the Woodsman kitchen. All of the meat will be used nose to tail and hung in the ageing room. The Woodsman will be unpretentious, charming and focussed on its amazing wood fired oven and charcoal grill. Head Chef Jon Coates will serve delicious flame grilled and roasted meat, fish and local vegetables from his open kitchen. Incredible service, open fires, real ale and a serious wine list will come together to place The Woodsman at the top of any foodie's Stratford hit list.