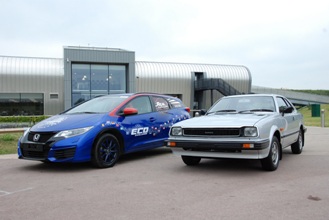 Last week the British Motor Museum was delighted to accept Honda's donation of the British-built Honda Civic Tourer 1.6 i-DTEC that holds the Guinness World Records title for fuel efficiency. Honda has been a major manufacturer in the UK for 25 years, building and engineering cars at its Swindon factory. The Civic reflects the modern-day output of Britain's diverse motor industry, the story of which the Museum tells through its collections.

The car was presented to the Museum by Fergal McGrath and Julian Warren of Honda's European Research & Development Team, the two men who were behind the wheel of the world record attempt.

Based on the strict and rigorous Guinness World Records guidelines, the Civic was awarded the official title of the record 'Lowest fuel consumption - all 24 contiguous EU countries', which was calculated across the entire 13,498km (8,387 mile) journey.

The rules stated that all 24 EU countries had to be visited and the same two drivers must be in the car for the whole journey, meaning Fergal and Julian were faced with the challenge of driving a daily average of 600km, sharing a minimum of 7.5 hours behind the wheel each day! The car started its epic road trip in Aalst, Belgium on Monday 1 June 2015, navigating around the continent in a clockwise direction, arriving back in Belgium on June 25 2015.

Fergal commented "Julian and I are extremely proud of the Honda Civic Tourer and embraced all the challenges that came with setting the Guinness World Records title in 2015. It is fantastic that this car will now be on display in the British Motor Museum and is a testament to the hard work of the Honda team involved."

The Honda Civic Tourer will now form part of the Museum's collection of over 300 cars and be on display in the Collections Centre. It joins one other Honda - a Prelude that was a gift to British Leyland's chief, Sir Michael Edwardes, from Honda boss Mr Kawashima when the two companies signed their historic partnership agreement in 1979.

For more information about the Museum and its collections please visit http://www.britishmotormusuem.co.uk or call 01926 641188.