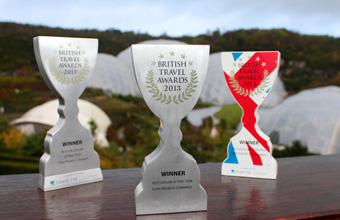 THE Eden Project in Cornwall has been named Best UK Leisure Attraction at the British Travel Awards for the third year running.
The awards, which are voted for by the public, are the biggest of their kind and are known as the travel industry Oscars.
In what was a great night for Cornwall, Best UK Holiday Region was won by Cornwall for the fifth year running.
Strategic marketing director Rita Broe said: "It's a huge honour to accept this award on behalf of the fabulous Eden team for the third year running, so much more so because it represents a massive show of public support in what have been challenging economic times. To receive this as Cornwall is again voted best holiday region makes it even more special.
"We are grateful to everyone who took the time to vote for Eden and are proud to have been shortlisted with such a fantastic group of UK attractions."