Great year for Arundel Castle with 8.5 per cent more visitors 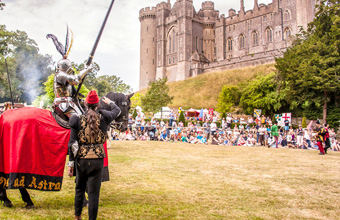 ARUNDEL Castle in West Sussex attracted over 154,600 visitors in 2013, an increase of 8.5 per cent on 2012, according to figures.
The popular events calendar has been attributed to the growth in visitors and the highlight of the year, the Medieval Joust and Tournament Week in July, received 20 per cent more visitors than in 2012.
Castle manager Bryan McDonald said: "Our events have grown in popularity with professional performances from the Raven Tor Living History Group entertaining visitors of all ages throughout the year and the exciting Joust Tournament which is set to get even bigger in 2014. The pleasant weather this summer has also certainly helped."
Arundel Castle closed for the winter on November 3 and will re-open for visitors on April 1 2014.