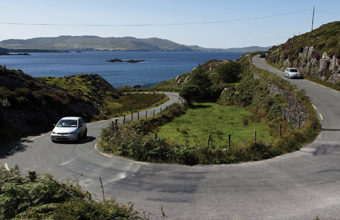 FUNDING worth â‚¬8m has been earmarked for the iconic Wild Atlantic Way project, Ireland's first long-distance driving route, stretching from the Inishowen Peninsula in Donegal to Kinsale in County Cork.
Advising FÃ¡ilte Ireland, the National Tourism Development Authority in Ireland, Colliers International in Dublin has led a multi-disciplinary team for the project.
Director of the Destination Consulting Colliers International Roger Hobkinson said: "As the longest dedicated coastal touring route in the world, the Wild Atlantic Way has the potential to significantly enhance the profile of Ireland in the core international markets - Britain, France, Germany and the USA - when it is launched in 2014.
"The experience of international driving routes means we expect the Wild Atlantic Way to attract more visitors to the west who stay for longer, spend more money and make more repeat visits. Overall we expect a significant range of net benefits for the tourism sector and economy of the west in the years to come."