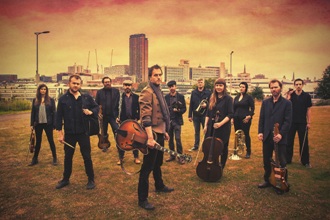 The hugely successful and popular Warwick Folk Festival returns with a heavyweight line up of folk superstars from around the world from 26 - 29 July at Warwick School and the surrounding town. Now in its 39th year, the colourful festival will be headlined by stars such as Show of Hands, Jon Boden & Remnant Kings, Korrontzi, Gordie MacKeeman & His Rhythm Boys, Granny's Attic, Vishten, Megson and Gnoss.
Tickets cost just £95 for the weekend and £110 for the four days. Early bird ticket sales will close late on Sunday 28 January and tickets will go on sale on Monday 29 January at the increased price. Festival goers are therefore advised to book their tickets ASAP and take advantage of the savings.

Jon Boden has become the 'stand out performer of his generation' (The Guardian) of traditional folk artists. He is best known as the lead singer of folk juggernaut Bellowhead. After 12 years, a quarter of a million album sales, 7 singles on the Radio 2 playlist and selling out hundreds of venues including the Royal Albert Hall, Jon announced in 2015 that he wanted to move on. In 2009, Jon founded his band The Remnant Kings. The band features the talents of former Bellowhead band-mates Sam Sweney and Paul Sartin, plus Leveret's Rob Harbron and Ben Nicholls and Richard Warren (King of The South Seas).
Show of Hands features Steve Knightley and Phil Beer, two extraordinary craftsmen with one unique sound. Dovetailing old songs with new, this is an unmissable celebration of the duo's enduring impact on roots, acoustic and folk music. Multi-award-winning, and with five sell-out Royal Albert Hall shows, the original duo format makes a rare return to more intimate settings. Steve and Phil's special guest is musician Geoff Lakeman, chieftain of the brilliant Lakeman tribe.
The weekend festival will feature the very best in contemporary & traditional folk arts from the UK and beyond. Visitors can enjoy a full programme of energetic ceilidhs, concerts, singarounds, dance, intimate acoustic performances or full on gigs. Visitors can soak up the atmosphere, sit in the beer tent and watch the world go by or join in the sessions, shop in the craft stalls, learn a new skill in the workshops programme, taste tempting street food from around the world, or simply relax with friends in the wine and cocktail bar.

Dick Dixon, Festival Director said, "Established as one of the best folk festivals in the country, Warwick Folk Festival has something for everyone, with 15 venues on site plus varied stages in Warwick Town. We have some fantastic headline acts this year including Korrontzi which was the highlight of our 2016 Festival plus another packed programme of concerts, ceilidhs, workshops, a Craft & Music Fair and a Wine and Cocktail Bar".
Visitors to the festival can choose from Friday - Sunday tickets, Thursday - Sunday tickets or just visit for the day, plus under 14s go free! Tickets can be booked online and over the phone at the Bridge House Theatre Box Office. For more information please visit http://www.warwickfolkfestival.co.uk