Experience the wonders of Shakespeare's England in 2018! 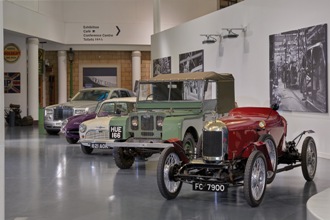 Experience the wonders of Shakespeare's England in 2018 with a host of exciting events and activities for all the family. See two new exhibitions at Compton Verney and six new summer productions by the Royal Shakespeare Company, book into a new boutique hotel in Stratford-upon-Avon, celebrate several anniversaries at key attractions and take part in a variety of festivals celebrating arts, literary, music, food, poetry, motoring and the river. Make 2018 the year you discover the wonders of Warwickshire.

The Royal Shakespeare Company's 2018 summer productions have been announced. In the Royal Shakespeare Theatre Christopher Eccleston will take on the title role in Macbeth, alongside Niamh Cusack as Lady Macbeth (13 March - 22 Sept); Erica Whyman will direct Romeo and Juliet (21 April - 22 Sept); there will be a short revival of King Lear with Antony Sher in the lead role (23 May - 9 June); and David Troughton plays Falstaff in The Merry Wives of Windsor (4 August - 20 Sept). In The Swan Theatre the productions will be John Webster's The Duchess of Malfi (1 March - 4 August), The Fantastic Follies of Mrs Rich (or The Beau Defeated) by Mary Pix, and Miss Littlewood a new musical by Sam Kenyon about Joan Littlewood, the anarchic theatremaker (22 June - 4 August).

Celebrated artists Eric Ravilious (17 March - 10 June) and James Abbott McNeill Whistler (6 Oct - 20 Dec) provide the inspiration for two of Compton Verney's major exhibitions while the 200th anniversary of Mary Shelley's Frankenstein (30 June - 30 Sept) sparks an exploration of our fascination with creating artificial beings. Marking the centenary of Armistice Day, a landmark exhibition devoted to artworks made by soldiers (17 March - 10 June), from the 19th century to the present day, once again makes the critically acclaimed Warwickshire art gallery and park one of the most essential places for culture lovers to visit.

An exciting new boutique hotel will open in Stratford-upon-Avon in the spring following a multi-million-pound restyling of the historic Falcon Hotel. The characterful Hotel Indigo Stratford upon Avon, owned by St James's Hotel Group, will have strong links to William Shakespeare. With parts of the hotel dating back to the 15th century, it will retain much of its original charm whilst offering guests luxury accommodation. Guest-rooms will include flat screen TVs, rainfall showers, luxurious toiletries and free Wi-Fi. There will also be a new state-of-the-art kitchen and restaurant led by a celebrity chef, a sociable bar and lounge, as well as a new gym and meeting room.

2018 marks the 25th anniversary of the British Motor Museum which houses the world's largest collection of historic British vehicles - over 300 cars spanning the classic, vintage and veteran eras along with an archive of film, photographs, personal papers and business documents. The Museum will be celebrating its anniversary with various events and family activities throughout the year.

Ragley Hall, the stunning stately home, will celebrate its 60th anniversary of being open to the public. Set in the heart of Warwickshire's countryside, Ragley Hall is the home to the 9th Marquess and Marchioness of Hertford. Thousands of happy picnickers will descend on the grounds on 11 August, as the Battle Proms returns for their 8th annual concert.

2018 also marks the bicentenary of Sir Humphry Repton, the last great English landscape designer of the 18th Century, often regarded as the successor to Capability Brown. Stoneleigh Abbey will be organising a number of events to celebrate his life and work that he undertook at the Abbey.

Shakespeare Week will run from 12 - 18 March. The annual national celebration of Shakespeare in primary schools returns for its fifth year with the theme of Storytelling and Poetry. With a host of free activities and resources, Shakespeare Week is a chance for children and their families to enjoy a fun introduction to Shakespeare's characters, stories and language. Launching on UN World Cultural Diversity Day and supported by Coventry University, the Shakespeare Birthplace Trust presents a new photographic exhibition 'Celebrating Peace and Reconciliation' of its renowned collections chosen by well-known peacemakers. Find out who selected which items and what they mean to the men and women of peace from 21 May.

The 65th Stratford-upon-Avon Poetry Festival takes place from 17 - 24 June around the theme of peace and reconciliation. Hear readings from classic war poets and listen to some of the best contemporary poets as they share their poetry of peace.

Chedham's Yard, a 19th Century heritage site, in the village of Wellesbourne, will continue its free entry policy in 2018. The yard was run by the Chedham family for 150 years. The Yard entered and won the 2006 BBC Restoration Village series giving access to £1,000,000 for renovation and restoration. The yard opened in 2012 with all the tools and other artefacts cleaned, preserved and returned to their original positions in the buildings. The forge is operated every Saturday and Wood Turning on some days.

The Stratford Festival of Motoring returns for its fifth consecutive year on the 6 & 7 May when the streets will throb with the sound of over 300 high performance motors and classic cars. The award winning 10th Stratford River Festival returns to the banks of the River Avon on the 30 June & 1 July. It is the largest family friendly free event held in Stratford with over 70,000 visitors expected to enjoy events on and off the river, market stalls, entertainment and fireworks display. The Stratford Food Festival is planned to take place from 22 - 23 September with over 100 stalls across 3 town centre areas.
The Warwick Food Festival takes place on 27 May whist the Kenilworth Show takes place on 9 June featuring a fun filled, action packed day out for the whole family. The Peace Festival takes place in Leamington Spa in July along with the Thai (17 July), Beer, Cider & Music (20/21 July), and Ukele Festivals in Warwick. The National Bowls Championships in Leamington takes place in August for a month as teams from across the country compete.
The annual 454th Birthday Parade through Stratford-upon-Avon will take place on Saturday 21 April, the closest Saturday to Shakespeare's acknowledged birthday on 23 April. Civic dignitaries, invited guests from around the globe, representatives of the literary and theatrical world will walk with students of Shakespeare's own school, King Edward's School, as well as local schools. All will follow the time-honoured route from the Town Hall through streets lined with well-wishers to the great playwright and poet's last resting place at Holy Trinity Church.

Stratford-upon-Avon Literary Festival will celebrate its 11th birthday from 22 - 29 April. The Festival is one of the most significant literary festivals in the UK, attracting thousands of people who share one passion: a love of books, writing and reading. This year's Festival will launch the children's book, Luna and the Moon Rabbit written by Camille Whitcher who won the 2017 Children's Picture Book Prize.

Warwick Folk Festival takes place from 26 - 29 July bringing together leading names from around the world with something for everyone from dedicated folk fans to music lovers with a wide range of tastes and styles including blues, rock, country and funk. There are also ceilidhs, plenty for families with circus skills, storytelling, theatre and crafts, plus a programme of workshops spanning music, song and arts.

Shakespeare's Sisters Soaps will be expanding their brand to curate a new Fair from 1 - 3 June alongside the successful November Fair at Stratford Town Hall. The Fair, which is going from strength to strength, gathers together the best local and regional artists.
A new Hotel du Vin will open in Stratford-upon-Avon with 48 bedrooms. Located in two Georgian townhouses, the hotel will be the first Hotel du Vin in Warwickshire. Facilities will include a bistro du vin, meetings space, private dining rooms and a banqueting room with the capacity to seat 80.
For more suggestions and information on accommodation please visit
http://shakespeares-england.co.uk/