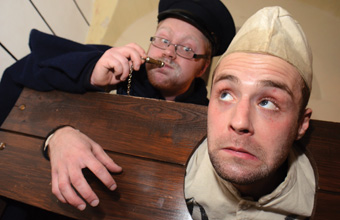 Oxford Castle Unlocked has announced a series of exciting events in 2014, allowing groups to explore the life of a prisoner. To launch the programme the castle, which has been a site of incarceration since the thirteenth century, will also be adding a fascinating new police exhibit to its permanent exhibition - providing groups with a unique insight into the Oxfordshire constabulary. Installed in February, the exhibition will feature a remarkable collection of artefacts donated by former Oxford police officer Phillip Haynes.

The superb collection will include an absorbing selection of police memorabilia, ranging from police badges right through to truncheons and handcuffs. The exhibit will complement a series of events which will run during 2014 at the castle, following the life of a prisoner. Spanning crimes and capture and moving on to trials, sentencing and escape, the series will culminate in October with execution.

Groups Sales Manager, Elizabeth Mounser, commented: "Oxford Castle Unlocked has always had a prison at its heart and was used as a place of incarceration for over 700 years, until the closure of Her Majesty's Prison Oxford in 1996. In 2014 the castle's Life of a Prisoner events and new police exhibition will really bring this to life for groups."

Oxford Castle Unlocked is a 1000-year castle, which was also used as a place of imprisonment for over 800 years. The attraction offers a 40-minute guided tour with a costumed character from the castle's history, exploring the Saxon stone-built St. George's Tower, the atmospheric crypt, the preserved prison wing and the archaic man-made mound, offering breathtaking views of Oxford.

Groups can book a visit to Oxford Castle by calling +44 (0)845 070 6255. Further information can be found at http://www.oxfordcastleunlocked.co.uk.