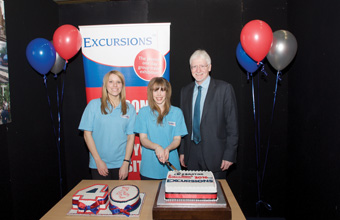 Excursions™ 2016 celebrated the show's 40th anniversary with great style and panache at Alexandra Palace on Saturday, 23rd January. Opening musical entertainment was provided by English National Opera and enthralling magic displays by Davenport's Magic Kingdom, while the Royal Horticultural Society (RHS) brought the outside in with a beautiful planted garden display marking the Year of the English Garden.

Visitors joined in the celebrations with a free Ruby Sunrise cocktail developed exclusively for the show by the Bombay Sapphire Distillery and made their choice from a fantastic array of show only offers from exhibitors, while Excursions colour themed red, white and blue anniversary cakes were shared amongst visitors and stand holders.

The dynamic one-day group travel show attracted over 270 exhibitors from the UK and mainland Europe with 19% booking space for the first time, including attractions, destinations, accommodation providers and tour operators. There was also a significant increase in UK exhibitors from further afield including the Midlands, North East and South West.

Over 1,100 visitors packed the Great Hall, many hadn't attended the exhibition before and were genuinely keen to discover what exhibitors had to offer.

Delighted with Excursions™ 40th anniversary show and ongoing success, Tourism South East Chief Executive Nigel Smith said; "We were very pleased to welcome a large number of quality visitors this year and delighted they joined with exhibitors in creating a great celebratory atmosphere. Already the post event feedback has been fantastic and we would like to thank all those who came along to the show, and our many exhibitors, for making it a great day out and look forward to welcoming everyone back in 2017."

Attending the show for the first time Ben Walker from the Ironbridge Gorge Museums, who was sharing the Shropshire Star Attractions stand with Weston Park, said, "As my first experience of exhibiting at a major travel trade show, Excursions™ has set the bar high. It's the perfect place to discover more about group travel and make quality new connections."

Delighted with the high level of visitors to her stand, Kim Hallett from Waddesdon Manor said; "I did not stop talking to people from the moment the show opened until about 3.15pm when I couldn't believe the time; always the sign of a good show! It was a different mix of people, with new contacts, and some returning who I hadn't seen in a few years".

Best Excursions™ ever
David Steele, AGTO Director and Membership Secretary, who has now attended all 40 exhibitions added; "My 40th was a show to remember; numbers held up to that of previous years and the quality of visitors to our stand was very high. People were engaged in conversation and stayed much later than in previous years. There is always a good atmosphere at Excursions but this year there was a special 'buzz' which could be put down to Bombay Gin circulating in the veins of many visitors, or that Davenport's magic tricks were putting everyone in such a happy frame of mind. For the first time in 40 years I didn't have the opportunity to wander round the exhibition. I congratulate all concerned with putting together one of the best Excursions…..ever".

And visitors were delighted with the show too; going along for the first time, Richard Church from World Heritage Site tour operator Battered Suitcase found the quality and variety of stands very beneficial: "Excursions enabled us to meet face-to-face with a number of new potential suppliers. We constantly seek unique experiences for our clients and a number of the exhibitors at the show demonstrated that they can provide these facilities."

The show is organised by Tourism South East in partnership with London & Partners, Group Leisure Magazine and VisitEngland. For more information visit http://www.excursions2016.com, follow Excursions™ on Twitter @Excursionsshow for news and updates or visit the show's Facebook page at 'Excursions: Group Travel Trade Exhibition'. Excursions™ 2017 will be held on Saturday, 28th January.