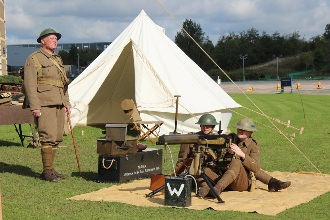 Visitors can step back in time on Saturday 30 September and Sunday 1 October as the British Motor Museum transforms into wartime Britain. Following last year's successful WW1 Family Weekend, the British Motor Museum is expanding this year's event to all things British Military and adding even more fun for families. There is even the chance to camp in the Museum grounds and make a full weekend of it!

Outside the Museum, attractions will include an impressive collection of British Military vehicles including the replica Mark IV Tank used in the movie 'War Horse', on loan from The Tank Museum. The Royal Warwickshire Regiment 1914 - 1918 Living History Group will be performing dynamic displays and period re-enactments, whilst in sharp contrast a modern day bomb disposal team will be demonstrating their Explosive Ordnance Disposal (EOD) Robot.

Inside the Museum, visitors can meet a British 'Tommy' in the trenches to learn about the conditions endured by soldiers on the front lines in WWI and drop into the Field Hospital to discover how injuries sustained in battle led to the discovery of new medical techniques and the foundations of plastic surgery! They can also explore 'B2737 - the Battle Bus', on loan from the London Transport Museum.

There will be plenty of activities to keep families entertained. Sign up for Soldier School or take on 'Kitchener's Mission' - a fun trail with exploits along the way including decoding secret messages, bandaging wounds in the Casualty Clearing Station, Zeppelin spotting and making a Princess Mary Christmas Gift Tin to take home.

Caroline Reid, Education Officer at the British Motor Museum stated, "We are thrilled to be making this British Military Weekend an annual event and adding even more attractions for this year. There is even the chance for visitors to make a full weekend of it and camp in the Museum grounds."

Normal Museum admission rates apply for the British Military Weekend. Adult tickets £14, Concessions £12 (including Service Personnel with valid ID card), Child £9 and Family Ticket £39. Children under 5 are free. Gift Aid annual passes are valid for this event. Camping is just £10 per person for one or two occupants when booked in advance, £15 per person on the day. For three or more people camping the price is £25 per pitch when booked in advance, £35 per pitch on the day.

To find out more about the British Military Weekend visit http://www.britishmotormuseum.co.uk or call 01926 641188.