Enjoy a cultural break in Shakespeare's England this autumn 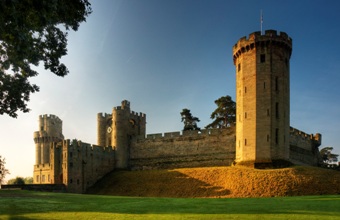 Enjoy a cultural break in Shakespeare's England with a host of things to see and experience this autumn. Take in theatre performances, live music, food festivals, horse-racing, stroll through spectacular coloured gardens, wander around an art gallery or simply relax enjoying traditional afternoon tea in front of roaring fires. With so much going on, treat yourself to a mini break this autumn and explore the stunning county of Warwickshire, crowned the only UK destination to appear in the Lonely Planet Best in Europe 2016 list.
See a Royal Shakespeare Company production of King Lear at the Royal Shakespeare Theatre until 15 October. Directed by Gregory Doran, the play stars Antony Sher in the title role, David Troughton as Gloucester and Paapa Essiedu as Edmund. Visit The Play's the Thing, which opens on 22 October in the Swan Wing and is the first ever permanent exhibition devoted to the staging of Shakespeare's plays. This immersive exhibition highlights some of the RSC's most iconic theatre productions and features treasures from the archive, including rarely-seen props, exquisite costumes and original set designs.
Stratford ArtsHouse will host Russell Kane on 17 November, Ultravox front man Midge Ure on 21 October, Tony Christie on 8 October and Kiki Dee on 18 November. Lesley Garrett will star as part of the 21st Stratford-upon-Avon Music Festival on 14 October. An audience with gardening writer and BBC TV presenter Monty Don is on 16 September whilst A Midsummer Night's Tease brings burlesque and cabaret to Stratford for the first time on 15 September!
Orchestra of the Swan, one of the UK's leading chamber orchestras, will host a performance by Laura van der Heijden, BBC Young Musician of the Year 2012 who will open the season with Haydn's cello concerto at Stratford Artshouse on 27 September.
Warwick Words History Festival runs from 3 - 9 October bringing together authors, guest speakers and readers to celebrate history. Join historians Juliet Barker, Tom Holland, Giles Milton, Janina Ramirez, Jacqueline Riding, Chris Skidmore and Alison Weir as they explore the our nation's history, from the Dark Ages to the twentieth century.
On 5 & 6 November wander around the Contemporary Arts Fair Discover: Gather: Give and see over 40 artists exhibiting at Stratford Town Hall.
Admire 40 varieties of Asters at Hill Close Gardens on 24 & 25 September. Saturday opening is free entry and in aid of NGS with all proceeds going to this worthy cause.
PRESS RELEASE
10 August 2016
2
The Fireworks Champions takes place at Ragley Hall on 10 September featuring 4 spectacular displays all precisely set to music. Capability Brown Parkland Walks take place on 16 & 17 September and The Festival of Flight Spectacular, a two day family air show, takes place from 1 - 2 October featuring top aerobatic displays. Visit Compton Verney art gallery to see the exhibition 'Queen Victoria in Paris, Watercolours from the Royal Collection' from 15 October - 11 December. 44 watercolours depicting the Queen's reception in Paris from August 1855 will be on display. Some were given to the Queen as gifts by Napoleon III, others she later commissioned as mementoes of her time in the city. Half of the works have never been exhibited before.
See Lee Mead at the Royal Spa Centre & Town Hall in Leamington Spa on 2 October. Lee returns to his musical roots with the release of his new album. His credits include roles in Joseph, Wicked, and Legally Blonde and on TV in Casualty. Tickets cost £22.
The Leamington Food & Drink Festival takes place on 10 & 11 September at the Pump Room Gardens. Experience the best of Leamington's food and drink at this popular event. The Stratford Town Centre Food Festival is from 23 - 25 September with demonstrations, workshops, taste trails, entertainment along with a very tasty celebrity chef.
Warwick Racecourse's season launches on 20 September. Race-goers can enjoy track and facility improvements, racing, music and food. The Racecourse hosts its Down Under Raceday on 29 September to celebrate life Down Under! Enjoy themed music, food and didgeridoo workshops! Kiwis and Aussies can get in for £5.
Take a guided tour of the Cotswolds with Go Cotswolds, who provide small group tours from Stratford-upon-Avon. Take in the autumnal colours whilst visiting the picturesque towns of Chipping Campden, Broadway, Stow-on-the-Wold and Bourton-on-the-Water, as well as sights and beauty spots including Broadway Tower, Dover's Hill and the Rollright Stones.
Enjoy the autumnal evenings and sleep under the stars in the new Knights Village Lodges at Warwick Castle. Set in the wooded 64-acre estate, the lodges have modern facilities, such as a wet room, WIFI and TV, alongside Mediaeval-style features.
Stay at Avonlea guest house in Stratford-upon-Avon during October, November & December. Stay for just £75 per room in a standard double room per night based on a minimum stay of 2 nights. Offer subject to availability and available from 1 Oct - 17 Dec.
Enjoy afternoon tea at Marcos New York Italian restaurant or in the Quill Lounge at the Mercure Shakespeare Hotel in Stratford-upon-Avon. Tea includes sandwiches, scones,
PRESS RELEASE
10 August 2016
3
sweet treats, a bottle of old style lemonade and selection of teas or coffees. Cost is £14.95 per person or £25 per couple. Add a glass of Prosecco for £4.50 or Champagne for £6.50 per person. Available from Monday - Sunday until 6pm.
Take part in a cocktail Masterclass evening at Ettington Park Hotel on 7 October. Master the art of cocktail making and food pairing as the cocktail master shows you how to create 3 cocktails, each complimenting a dish in the 3 course gourmet dinner. Costs £65 per person.
Dormy House, one of the finest boutique hotels in the Cotswolds, has launched a new Afternoon Tea. Available 6 days a week from 2pm - 4pm, Monday - Saturday, this English spread offers sandwiches, quiches, fancy cakes and scones together with a selection of fine Jing teas. Costs from £22.50 per person.
Enjoy Battle Of Eden 'A Celebration of Food' at Mallory Court Hotel on 8 October. The annual event sees the talented Eden head chefs showcasing their skills in a celebration of food. Price includes an 8-course dinner with wines. 8 hotels, 8 chefs, 1 winner - you decide! Costs £125.00 per person.
For more suggestions and recommended accommodation in the area visit http://shakespeares-england.co.uk