Doctor Who: An adventure in space, time, and churches 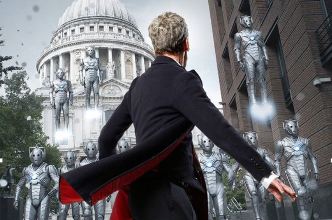 The National Churches Trust is featuring the churches visited by the Doctor on its church tourism website, ExploreChurches.

The Doctor has travelled from one end of time to the other and visited countless alien worlds along the way. But church buildings have played an important role in the Doctor's adventures, being used for contemporary story settings, backdrops for exciting action scenes and doubling up as other fictional locations.

Now you can discover a church visited by each Doctor on ExploreChurches, the church tourism website run by the National Churches Trust, http://www.explorechurches.org.

Each church listed on ExploreChurches has a dedicated page revealing its fascinating history and amazing architecture. There are details of opening times and directions to make it simple for visitors to plan their trip to the church.

The TARDIS arrives on the coast of 17th century Cornwall. Pirates led by Captain Samuel Pike and his henchman Cherub are searching for a hidden treasure, while a smuggling ring masterminded by the local squire is trying to offload contraband. The Cornish church in this story is used as a hideout by the Doctor's assistants after they run away after being falsely accused of the murder of the churchwarden. They hide here until the final climatic battle between the titular smugglers and the renegade pirates.

The Doctor, Jamie and Zoe return to Earth and become embroiled in the schemes of Tobias Vaughn. They meet up with an old friend, Colonel (now Brigadier) Lethbridge-Stewart, and some old enemies, the Cybermen who emerge from their sewer hideout to begin their invasion of Earth. St Paul's Cathedral is used in this episode as the backdrop to the deadly Cybermen walking down the steps as they emerge from the sewers. This iconic scene was recreated fifty years later by the twelfth Doctor and the latest Cyberman as they begin yet another invasion.

The Master, posing as a rural vicar, summons a cloven hoofed demon in a church crypt. Seeking to gain the ancient titan's demonic power, he gathers a cult and then corrupts or controls the residents of Devil's End village to bow to his will. With the Master fully prepared to destroy the Earth, the Doctor and UNIT must battle the wicked rites of a secret science wielded by an alien from another world. Aldbourne church, Wiltshire, was the central location for this classic 70's story. Several scenes were shot in and around the church, including the memorable battle between the UNIT soldiers and a rather lively gargoyle that's come to life!

The Doctor and Sarah find themselves in the English village of Devesham near a Space Defence Station. The village seems deserted, the telephones don't work, calendars are stuck on the same date and white suited figures are wandering about aimlessly. Who are the Kraals and what are their plans for Earth? This Oxfordshire church provides a brief backdrop to a scene where the Doctor is rescued by Sarah Jane after being tied to the market square cross by the mysterious Kraals.

The Doctor, with his companions Tegan and Turlough, arrive in Little Hodcombe. In a derelict church the townspeople's reenactments of English Civil War battles are causing a dormant entity, the Malus, to reawaken. The church and grounds are used extensively in this episode but all is not as it seems. The lych gate was actually a prop, not part of this Dorset church itself, and there is an outtake of a horse knocking this model gate over.

While trying to fix the TARDIS's chameleon circuit, the Doctor returns to the place where his adventures began, Foreman's junk yard on Totters Lane, London. For the first time in the show's history the TARDIS materialises in a different shape to blend in with its surroundings. But, the Doctor hasn't quite got it right and it appears cunningly disguised as a church organ! Meanwhile the Cybermen are busy plotting to alter the course of history by crashing Halley's Comet into earth! Near to where this junkyard scene was filmed you can find St Saviours and while the church doesn't feature directly in the episode it does contain a very similar looking church organ. Coincidence?

The TARDIS materialises at a secret naval base off the coast of Northumberland during the Second World War. Dr Judson, a scientist there, has created the Ultima Machine, an early computer designed to break German codes. The base's Commander Millington plans to let a Russian commando unit led by Captain Sorin steal the machine's core, which he has booby trapped with deadly toxin. This story revolves around an ancient being that has been buried in the catacombs beneath the local church and its followers trying to restore it to life. The church used is actually in Kent, and in the story has a vicar who bears more than a passing resemblance to Nicholas Parsons.

The Doctor, nearing the end of his seventh life, is charged with transporting the remains of his fellow Time Lord, the Master, back to their home planet. Despite his precautions, his old enemy is not only not dead, but is out for revenge. While the majority of this episode is set in America, the Houses of Parliament are glimpsed briefly as the world ends.

Chapel of St Peter ad Vincula, Tower of London: John Hurt - The Day of the Doctor

It's the Doctor's darkest hour. Something terrible is awakening in London's National Gallery; in 1562 a murderous plot is afoot in Elizabethan England; and somewhere in space an ancient battle reaches its devastating conclusion. He must join forces with his past incarnations to save all of reality but first, just a small matter of escaping the Tower of London. Whilst they don't actually visit the chapel it can be seen in the background, and in Elizabethan London it would have been the site of several recent high profile burials.

Pete Alan Tyler, father of Rose and husband of Jackie, died on 7 November 1987, the day of Stuart Hoskins and Sarah Clark's wedding. Rose was just a baby at the time and Jackie told the young Rose that nobody was there for Pete, so when she met the Doctor naturally she wanted to go back in time and meet her father. This church in Cardiff features as the central plot point for the wedding, with the Doctor sheltering everyone inside when the time reapers attack. Several scenes are shot both inside and around the grounds, with the TARDIS memorably materialising in the centre of the church towards the end of the episode.

It is the tenth Doctor's final journey but the Master, has been resurrected on Christmas Eve. Each determined to cheat death, the battle rages from the abandoned wastelands of London to the mysterious Immortality Gate, whilst the alien Ood warn of an even greater danger approaching, as a terrible shadow falls across the entire universe. St Mary's, near Cardiff, is used in the closing montage of shots as the Doctor pays one last visit to his friends before his regeneration takes place. On this occasion he's here to watch former companion Donna get married and to leave a lucky lottery ticket as a wedding gift.

It's 2020, and the most ambitious drilling project in history has reached deeper beneath the Earth's crust than man has ever gone before. But now the ground itself is fighting back. The eleventh Doctor, Amy and Rory arrive in a tiny mining village in the Rhondda Valley and find themselves plunged into a battle against a deadly danger from a bygone age. The church and its graveyard feature heavily in the opening scenes for this episode and later on, when the Doctor and his friends find themselves under siege from the Silurians, they take shelter within the church.

A long time ago, the Doctor made a deal in the Tower of London. 20 million Zygons walk among us in human form, living undetected in peace and harmony. But cracks are showing in this delicate peace; humans and Zygons are disappearing. In city apartment blocks lifts are going missing and, far below the streets of Britain, alien pods are growing in secret caverns. The cast filmed a scene at St Catherine's church hall, near Cardiff, involving Zygons who had just invaded.


About the National Churches Trust

The National Churches Trust is the national, independent charity dedicated to supporting and promoting places of worship of historic, architectural and community value used by Christian denominations throughout the UK. The Trust does this through the provision of grants for repairs and modernisation, support, advice and information and campaigning to highlight the cause of church buildings and the value they provide to communities.

The Trust is the successor to two older charities, the Historic Churches Preservation Trust, founded in 1953 and the Incorporated Church Building Society, founded in 1818.