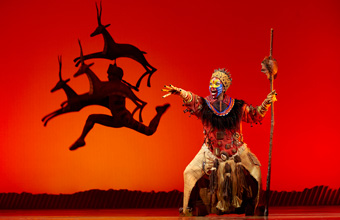 Disney's award-winning musical THE LION KING is now in its 16th triumphant year at London's Lyceum Theatre. Since the UK premiere in London on Tuesday 19th October 1999, THE LION KING has entertained over 12 million theatregoers and remains the West End's best-selling stage production. It also recently became the sixth longest-running West End musical of all time. Tickets are currently on sale until March 2016 for individual bookings and July 2016 for Group bookings.
Julie Taymor's internationally-celebrated stage adaptation of Disney's beloved animated film premiered on Broadway in 1997 and has now been seen by almost 80 million people across six continents. Nine productions are running concurrently around the globe: In addition to the record-breaking productions in London and New York, THE LION KING can currently be seen in Hamburg, Madrid, Tokyo, Brisbane, Basel and on tours of the North America and Japan. A tenth production is currently in rehearsal in Mexico City, and due to begin performances in May. In the future the production is set to open at Shanghai Disney Resort.
Julie Taymor, one of the world's most innovative directors, brought a vast array of disciplines to THE LION KING, including extensive experience staging epic theatre and opera productions, exploring classic myths through ritualised puppetry, mask, and movement. THE LION KING was the first musical she directed in the commercial theatre, and Taymor made Broadway history by becoming the first woman to win the Tony Award® for 'Best Director of a Musical'.
The show's full creative team, all of whom won Tony Awards® for their work on THE LION KING, reunited in 1999 to recreate the show for British audiences. Julie Taymor and Michael Curry created hundreds of masks and puppets. Scenic design is by leading British designer Richard Hudson and lighting is by Donald Holder. Costume design is by Julie Taymor, and choreography by Garth Fagan.
The book was adapted by Roger Allers, who co-directed the animated feature, and Irene Mecchi, who co-wrote the screenplay of 'The Lion King'.
The original score from the animated film was expanded for the stage and now features 15 musical numbers.
As well as writing completely new songs, South African composer Lebo M created an evocative blend of African rhythms and chorales, with additional material by Julie Taymor and Mark Mancina. Elton John and Tim Rice have added three new numbers to the five that they wrote for the award-winning score of the animated film. The resulting sound of 'The Lion King' is a fusion of Western popular music and the distinctive sounds and rhythms of Africa, including the Academy Award®-winning Can You Feel The Love Tonight and the haunting Shadowland.
THE LION KING is produced by Disney Theatrical Productions.