Classic Ford fans are in for a treat at the 'Old Ford Rally'! 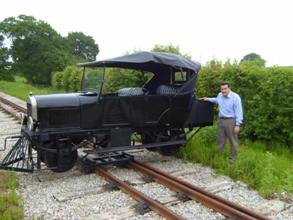 Classic Ford fans are in for a treat when the British Motor Museum hosts the 9th Old Ford Rally held in conjunction with the Ford Y & C Register. On Sunday 16 July around 600 classic Fords will go on display at the biggest rally of classic Fords in the UK. Vehicles including commercials, tractors and vehicles with a Ford engine built up to 1990 will be on display, exhibiting the incredible range of vehicles produced by one of the world's biggest manufacturers.

Visitors will be able to see a huge range from Model T's to the cars of the pre-war austerity years plus agricultural vehicles, Thames and Ford commercial vehicles as well as the more luxurious post-war Zephyr's, Zodiac's and Granada's. There will also be the Mk1 and Mk2 Cortina's, Anglia's, and Escorts as well as Capri's from the 1960's - mid 1980's. A first for this year is the 1925 Ford Model T Railway Inspection Car which will be running on a short 30m section of track outside the Collections Centre.

The show will also host a display of Ford or Ford engined military vehicles of all ages and the Bicester Home Guard will also be inattendance supporting the military vehicle section. There will be an autojumble and an arena with live displays and commentary throughout the day. The Midlands Meccano Guild will also be featuring an exhibition of hand built models with over 50 tables of models on display within the Museum. Visitors will have full access to the museum and the Collections Centre as well as the show outside.

Tom Caren, Show Manager at the British Motor Museum stated "This superb show is a real enthusiasts event and incredibly popular with fans of this iconic marque. Anyone who loves old Ford vehicles is guaranteed a great day out".

Tickets for the show cost £14 on the day for adults, £9 for children and £39 for a family. Discounted tickets are available in advance online. Camping is available on Saturday 15 July. Price per pitch, tent or caravan, is £25.
To find out more about the British Motor Museum please visit the website at http://www.britishmotormuseum.co.uk or call 01926 641188.