Characters Including Finalists and Judges Revealed As Full Casting Is Confirmed For I Can't Sing! 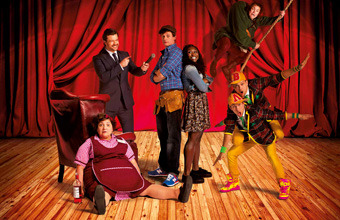 Ahead of a performance by cast members on next Monday's broadcast of the Royal Variety Performance, Stage Entertainment and Syco Entertainment are delighted to announce full casting for I CAN'T SING!, the brand new musical comedy from Harry Hill & Steve Brown which opens in the West End next Spring.

Along with Chenice and Max, the I CAN'T SING! hopefuls include KATY SECOMBE as supermarket checkout chanteuse Brenda, CHARLIE BAKER as The Hunchback and SHAUN SMITH and ROWEN HAWKINS as hyperactive Irish pop duo Alterboyz.

Harry Hill said
"I worked with a lot of our cast in the workshops for I Can't Sing! and we have some brilliant new faces too. I'm thrilled with the acting company we have on board - and it's a coup to have Nigel Harman as Simon. He was so funny in Shrek the Musical - not so much in Downton. With the wig and teeth he looks more like Simon, than Simon."