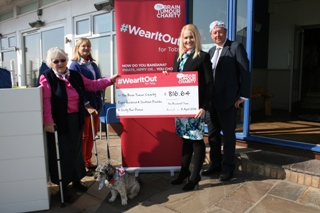 Staff and guests at the Brudenell Hotel, Aldeburgh have raised £816.64 for The Brain Tumour Charity by joining its national Wear It Out fund raising initiative during March.

On Brain Tumour Day, 4th March, the team wore specially designed bandanas to show their support for the charity and eight year old Toby who has a brain tumour; his grandmother Felicity Hoare, lives in Aldeburgh and is a regular guest at the hotel.

Visitors to the Brudenell were encouraged to buy and wear an official bandana with all proceeds going to the charity, or place their donation in one of the collection boxes at reception or in the Seafood & Grill restaurant. Anyone purchasing a bandana was also encouraged to take a selfie and tweet their image in support of the charity using the hashtag #WearItOut.

The initiative was continued throughout the Brain Tumour Awareness month of March until all the bandanas were 'sold', while the collection boxes have also remained in place.

Brain tumours are the biggest cancer killer of children and adults under 40. The Brain Tumour Charity is the UK's leading brain tumour charity. For more information visit http://www.thebraintumourcharity.org and for details about the Brudenell Hotel visit http://www.brudenellhotel.co.uk