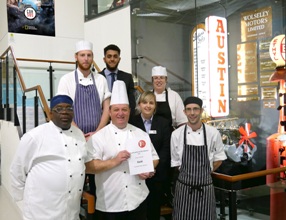 Now in their 5th year, the 'FreeFrom' Awards aim to raise awareness of 'FreeFrom eating' within food service and to set a standard of excellence to which FreeFrom eateries can aspire. 'FreeFrom' in food service has grown dramatically over the last 5 years but there is still a long way to go.
The Museum's catering team strongly believe in producing quality food that is safe for all its customers. They have undergone extensive allergen training and installed a Gluten Free kitchen and customer allergen information point. The venue became the first Museum & Conference Centre to gain 'Coeliac UK GF (Gluten Free) Accreditation' in 2015 and visitors can enjoy a wide range of FreeFrom and gluten-free options in the Junction 12 Café, all freshly prepared and with all 14 allergens fully traceable.
The award judge said "The Café offers a good selection of gluten free options including puddings. The dishes were of good value, we enjoyed a decent size bowl of soup, and our portions of fish and chips was good too. Overall it was a positive experience and we were able to eat a decent meal without any reaction. I felt they paid attention to my requirements and took my concerns/food issues very seriously and professionally."
Paul Kelly, Head Chef at the British Motor Museum said "We are delighted to have won these two awards for the second year running which is testament to my team who aspire to the highest food production standards."
The Café menu and allergen links can be found at http://menus.whatsinmydish.co.uk/BritishMotorMuseum. The Museum is also extending its offering of vegetarian and vegan choices. To find out more about the British Motor Museum please visit the website at http://www.britishmotormuseum.co.uk or call 01926 641188.