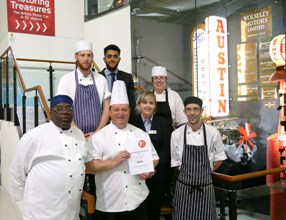 
The British Motor Museum has won Gold in 'Focus on Gluten' and Silver in the 'Cafes and Teashops' category at the FreeFrom Eating Out Awards. The awards, which are in their 5th year, were launched to raise awareness of the opportunities offered by FreeFrom food within the food service sector. The winners were announced at a presentation party on 21 November at the London trade show 'Food Matters Live'.
The catering team at the Museum passionately believe in producing quality food that is safe for its customers. They have undergone extensive allergen training and shown great commitment in achieving Coeliac UK accreditation. The venue became the first Museum & Conference Centre to gain 'Coeliac UK GF (Gluten Free) Accreditation' in 2015 and has its own Gluten Free kitchen. All visitors can enjoy a wide range of FreeFrom and gluten-free options in the Junction 12 Café, all freshly prepared and with all 14 allergens fully traceable.
The award judge said "'Their staff were very welcoming and when I asked about the Gluten Free options, there was no hesitation in getting the Chef out to speak with me. They had an electronic touch screen at the serving area where I was able to see what allergens were in each dish on the menu. I definitely felt they paid attention to my requirements and took my concerns/food issues very seriously and professionally. I can't wait to eat there again!"
Paul Kelly, Head Chef at the British Motor Museum said "We are delighted to have won these awards. Last year we won the silver award in the Cafes and Teashops category, so to win this again, and win Gold in the 'Focus on Gluten' category, is a great credit to my team who all aspire to the highest food production standards for the enjoyment of our visitors."
The café menu and allergen links can be found at http://menus.whatsinmydish.co.uk/BritishMotorMuseum. To find out more about the British Motor Museum please visit the website at http://www.britishmotormuseum.co.uk or call 01926 641188.