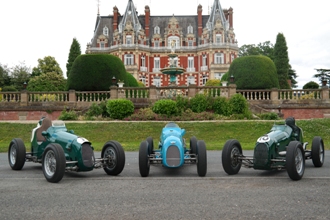 This summer the British Motor Museum will be taking two of its unique Austin Sevens to the Chateau Impney Hill Climb for the first time. The event which takes place on 7 & 8 July will see the Museum's 1935 Austin Seven side-valve and 1936 Austin Seven twin-cam single-seat racing cars take to the track.
They will be joined by the Chateau's own 1936 Austin Seven twin-cam, giving racing enthusiasts a rare opportunity to see all three of the surviving Works Austin Sevens run together in public.
Stephen Laing, Curator at the British Motor Museum said "These little Sevens are some of the most exciting pre-war racing cars and were big hitters in racing scene of the 1930s. They are amongst the last single seater racers ever to be built by a major British manufacturer and we are really looking forward to reuniting them on track after so many years."
The Chateau Impney Hill Climb was re-launched in 2015 after a 48 year hiatus, and has gone from strength to strength with 16,000 visitors expected this year. Visitors can catch the action from the grandstands and get up close with the cars taking part in the paddock. There is also a Concours d'Elegance showcasing a range of stunning and priceless cars, luxury trade stands, a vintage funfair and a spectacular Supercar Expo of 100 cars.
Charlie Martin, Event Manager of the Chateau Impney Hill Climb said "The Museum's two Austins will join around 200 competitors in a range pre-1967 vehicles - some of which competed at the Chateau in it's heyday. They will tackle the tricky hill climb course, hailed as one of the most challenging new courses in the country."
For more information about the Chateau Impney Hill Climb visit http://www.chateauimpneyhillclimb.com. Tickets are available online - advance Adult tickets starts from £20, and £25 on the gate. After the event both Austins will return to the Museum and be back on show for Museum visitors. For more information about British Motor Museum visit http://www.britishmotormuseum.co.uk