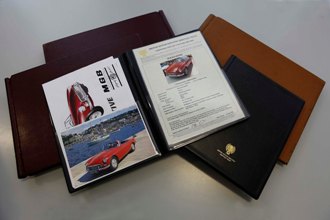 After more than 35 years of the Heritage Certificate service the British Motor Museum is approaching the landmark 100,000th Certificate and is running a competition to award one lucky classic car owner the opportunity to own this special document.

The popular Heritage Certificate service began back in 1981. For the first time, owners of marques which were manufactured by British Leyland could apply for the details of their cars as they were recorded in the original factory ledgers. Over the years it has evolved from a simple letter to a specially designed numbered Certificate which is accepted as an official document by the DVLA and importation authorities worldwide.

These days there is an online ordering service at britishmotormuseum.co.uk/archives which makes it easier for customers to order their certificate, and they can also enhance it by adding a personalised photograph, a Technical Specification or a Heritage Document Wallet. The 100,000th competition prize of a Premier Heritage Certificate includes all these enhancements along with a family annual pass to the Museum. To enter you will need to own one of the marques and models for which the Archive holds the build records (a full list is available on the website). Once you've checked your car is eligible, go to the competition page http://www.britishmotormuseum.co.uk/archive/archive-competition-entry and answer the following question. The winner will be the person with the closest guess.

The Heritage Certificate Service started in 1981 but that year is more often remembered for the Royal Wedding. During her engagement to Prince Charles, Lady Diana Spencer famously drove an 'emberglow red' Austin Metro. Can you guess the date it left the production line - the day, month and year?

For more information about the British Motor Museum, the Heritage Certificate service and the competition along with its full terms and conditions visit britishmotormuseum.co.uk or call 01926 641188.