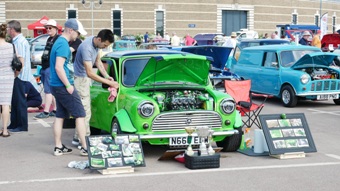 The British Motor Museum will celebrate 60 years of the iconic British Mini with a number of special events throughout the year. Starting with three weeks of 'Mini Madness' family activities during the Easter school holidays followed by two special events in August.
On Saturday 3 August there will be an attempt to set a new Guinness World Record for the largest Mini Mosaic (quantity of cars spelling a word). Organisers are looking for over 600 classic Mini's and variants to spell out the phrase 'Mini 60'. Filming of the attempt will be taken from the air providing evidence which will then be submitted in pursuit of a new World Record. Eligible vehicles, which must be produced between 1959 and 2000, can include the Clubman, Clubman Estate, Countryman and Cooper range along with more obscure models like the Marcos, Moke, Scamp, Wild Goose, Riley Elf and Wolseley Hornet. Entry is just £7 and tickets can be bought online.
The National Metro & Mini Show, a one day show dedicated to both iconic marques will take place the following day, Sunday 4 August, the weekend before the International Mini Meet, allowing international visitors and enthusiasts to join in with a week of Mini celebrations. Hundreds of these popular British cars will be on display including '621 AOK', the first Mini produced in 1959 and 'X411 JOP' the last ever classic Mini to be produced at Longbridge in 2000, along with '33 EJB', 'AJB 44B' and 'LBL 6D' the Monte Carlo Rally winning Mini's of 1964, 1965 and 1967. With 2019 also marking the 25th anniversary of Rover's 100, visitors can also see the last Rover 100 produced. This was signed by almost 1200 people involved in the Metro production and is on display in the Museum. Owners of Rover 100s can enter their vehicle free of charge - to claim this offer simply download a vehicle entry booking form from the website.

Tom Caren, Show Manager at the British Motor Museum said "As the British Motor Museum is home to the first and last classic Mini's it is only fitting for us to host several events to celebrate the milestone anniversary of this iconic car. We welcome owners of all classic Minis, even Mini vans and pick-up's, to be part of setting a new Guinness World Record - a fitting tribute to one of Britain's most popular little cars".
Entry into the World Record attempt is just £7 per vehicle which also includes entry to the Museum and the National Metro & Mini Show for the driver and one passenger on both days. Tickets are required for each additional passenger which can also be purchased online. When purchasing your tickets please remember to tick the appropriate box to say you wish to take part in the World Record attempt. Visit http://www.britishmotormuseum.co.uk/events to book your tickets.
Visitor tickets and vehicles entry for the National Metro & Mini Show is also available online and are discounted in advance. If you enter your vehicle before the 31 May you will be in with a chance of winning a Laser Tools 6 Draw Top Chest worth over £400. Visitors to both events will also be able to explore over 300 of the Museum's historic British vehicles which date from the 1900's to the present day. Camping will also be available for the weekend. Please note that Annual Passes are not valid on Sunday 4 August. For more information please visit http://www.britishmotormuseum.co.uk/events/national-metro-and-mini-show